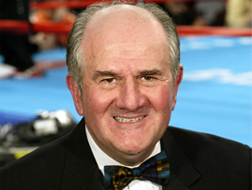 HBO’s Harold Lederman was on hand for ‘Mexican Style’ and walked away impressed as anyone over the Kazak bulldozer Gennady Golovkin.

“The show was a great show. Gennady Golovkin is something special, 2 round knockout of Marco Antonio Rubio. He’s a good as people say he is,” Lederman told ThaBoxingVoice.com. “He hits hard, he ends the show in great fashion, what more could you want from the guy? He’s destined to be the best middleweight in the world.”

Regarding his next opponent Martin Murray, Lederman feels he or any other middleweight doesn’t pose that great of a challenge to Golovkin.

“I guess its him and Martin Murray next in Monte Carlo. But Triple G is really special, I don’t know anyone that could give him a fight because he certainly looks good enough to beat anyone right now.”

So if its not 160, Lederman feels the 168 lb. division is where Golovkin will mark his legacy in boxing.

“He may have to move up because it’s a shame at 160, I don’t think there’s anybody out there that really can be competitive,” stated Lederman. “I’m sure sooner or later he’ll fight the winner of Miguel Cotto-Canelo Alvarez which will be a great fight. I think that’s what he’s looking for at 160. But afterward he’s got to move up. He needs Andre Ward, he needs Carl Froch; he needs a good 68 pounder to show how special he is.”

Many people are skeptical of either Cotto or Canelo taking the fight with Golovkin. But Lederman feels there’s too much money to lose if either decides not to after they fight.

“There’s too much money not to fight him. It’s still a tremendous risk to fight Triple G but when you have a pay-per-view fight like Cotto and Canelo against Golovkin, it’s worth it, there’s more money in that fight than any other fight after they fight each other.”