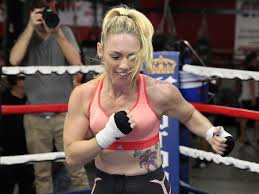 Stephen A Smith is no stranger to saying stupid and controversial shit. It’s probably the main reason ESPN keeps him around because they know people will talk about it and it’s free publicity. Smith is like a drunk uncle that rambles whatever idiotic thing that comes to mind is once again at the center of controversy and it has gotten him in hot water with a lot of women in boxing and MMA that could easily kick his ass.

“When I think about pugilistic sports, I don’t like seeing women involved in that at all,” stated Smith on the Black On The Air podcast . “I just don’t like it. I wouldn’t promote legislating laws to prohibit them from doing so, but I don’t want to see women punching each other in the face. don’t want to se women fighting in the octagon and stuff like that.”

Many women have called into question what Smith has stated but some have gone on the offensive.

Heather Hardy took to Twitter to unleash on Smith in a series of Tweets, calling him a cunt q few times in the process.

“And Incase I haven’t said this loud enough today…. FUCK YOU!

– signed, a single mom trying to feed her kid. Doing the only thing I’ve ever been good at fighting. You owe all of us an apology.”

“Let’s clarify this unpopular opinion. A person who says ‘I don’t like seeing women do….’ (insert anything here).  That’s not a fucking opinion. That’s sexism. That’s gender discrimination. That’s no longer socially acceptable. How about we hold these cunts accountable.”