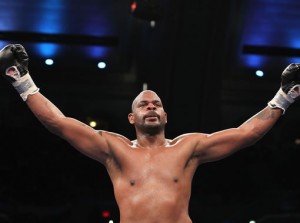 If you’re looking for the 1st big upset of the 2013 boxing year, well look no further than what happened in Liverpool this afternoon. David Price came into this fight with Tony Thompson as a heavily touted heavyweight prospect in division ruled by the Klitschko royalty.

Thompson was supposed to be Price’s 1st real test in his young career. It was a test the young heavyweight failed miserably. Thompson, already a heavy underdog came in at a heavy 263 lbs. and looked very out of shape. But that didn’t seem to matter today.

In a division and a sport where all it takes is one punch, that was all it took.  In the second round, Thompson landed one massive shot to the ear of the younger Price and floored him. Price got up but was seemingly not in a state enough to continue, and the referred called a halt to the contest.

Thompson, just a few months removed from losing dreadfully to world heavyweight champion Wladimir Klitschko, shook the boxing world in a major way, knocking of one of the most touted prospects of last year.

After the fight, Thompson called out Tyson Fury, another heavyweight prospect who fights Steve Cunningham on April 20th in New York City.

As for David Price, it’s a major disappointment in a young career. Price was being groomed to be a world champion and maybe someday down the line fighting a Klitschko. With the age of the heavyweight champions and the length and skillset of Price, it was seemingly bound to happen down the line. Now the road to the Klitschkos takes a step back. Maybe it was a good thing for Price. If he couldn’t defeat an overweight past his prime Tony Thompson, then who knows what might have been had he met a Klitschko before being tested.

Classy in defeat, Price said that he will learn from this and come back stronger. Hopefully he does because the depth of talent in the heavyweight division is shallow, and tonight took another hit with this loss.