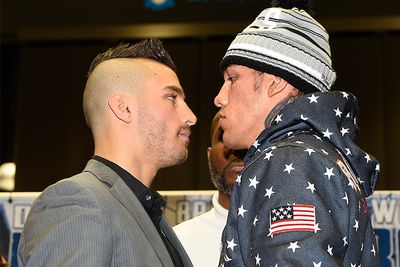 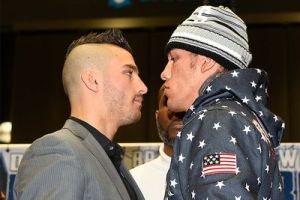 This Saturday, HBO Boxing will be live from the Barclays Center in Brooklyn, NY as a pair of middleweights and junior welterweights square off to headline the card. Canada’s own, David Lemieux will be facing one of Philly’s favorites “King” Gabriel Rosado, while also on the card, rising star, Thomas Dulorme will be squaring off against another Philly fighter, Hank Lundy for the NABF light welterweight belt. All four fighters will be looking to make a name for themselves in what should be an interesting night in NY.

David Lemieux is a young 25 year old, hard punching fighter from Montreal, Quebec. He’ll be entering the ring with a 32-2 record with 30 of those wins coming by way of KO. The biggest question regarding Lemieux is regarding how much he has grown as a boxer in the last three years, when he lost his only two professional fights against what were his two best opponents, Marco Antonio Rubio and Joachim Alcine. This is his 1st career fight outside of Canada and the question must be raised as if he hasn’t gotten too used to the friendly confines of fighting in his hometown every fight.

Gabriel Rosado (21-8 with 13 KOs) is known around boxing circles as one of the toughest fighters in the sport. He never backs down from a challenge and he will give you his complete 100% effort. His best wins have come against Charles Whittaker and Saul Roman, but his losses to fighters like Alfredo Angulo, Gennedy Golovkin, and Peter Quillin is how Rosado has gotten his reputation. Still young at age 28, Rosado is hoping that a win here would start to turn the direction of his career upward in what would be probably known as his best win.

As I said earlier, this fight will show how much Lemieux has improved as a boxer in the last three years because I honestly think Rosado is the better technically sound fighter. Rosado has the longer reach and knows how to use a jab. The problem is he doesn’t seem to have the power to KO middleweights and Lemieux is a big middleweight. Another issue for Rosado is he is now known as a bleeder and that normally doesn’t go over well with the judges. Even if he’s winning, he doesn’t look like the winner. My prediction is Lemieux by 7th round stoppage, even though I think at least one judge will have Rosado up on a card because of his boxing skill.

The 24 year old Thomas Dulorme will be stepping in the ring with a 21-1 record with 14 KOs. He was very impressive in his last fight against Karim Mayfield. That was his biggest win of his young career and he now hopes to build off that against Lundy. Dulorme knows that a win against Lundy would put him on the fast track towards a world title shot. Before Mayfield, the last time Dulorme stepped up was as a 22 year old against Luis Carlos Abregu, a fight that was stopped in the 7th round when Dulorme’s corner threw in the towel.

Hank Lundy is another tough fighter out of Philly. He’ll be entering the ring with a record of 25-3-1 with 12 KOs. His three losses weren’t to bums as Viktor Postol, Ray Beltran, and John Molina are all respectable boxers who all have had solid careers. He best wins are against David Diaz and Ajose Olusegun. A lot of people look at Lundy as a guy that will put up a solid fight, but isn’t anything great. He is hoping to stop Dulorme and change people view of him as a possible future world champion.

Just like in the Lemieux-Rosado fight, I consider Lundy the better fighter, but the younger fighter will probably be the favorite to get the nod. I felt the same way when Dulorme fought Mayfield. I do think Lundy will put up a better battle than Mayfield did that night, but Dulorme seems to be getting better every fight and it’s hard to continue to hold his one loss against him. Everyone can’t start reaching their full potential to beat good veterans at age 22. I can see this easily being a 116-112 unanimous type decision for Dulorme.

It’s interesting that both of these fights seem to be the same type of fight, just at different weight classes. However, I think both fights matchup with styles correctly that we may have some good scraps on Saturday. Sadly, the big question will be how many people will be there to see it. Ticket sales have seem to be going slow, there is some unrest in NY nowadays and none of the fighters mentioned in this article are from the area. Hopefully with how low the prices are, people decide to come out and watch some good boxing action. Enjoy the fights.