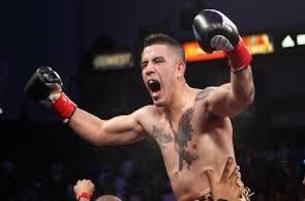 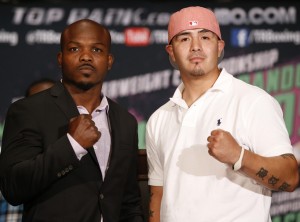 Brandon Rios is out on a mission to erase his reputation as a bruiser who struggles with boxers and is looking to prove it against Timothy Bradley Nov. 7 in Las Vegas.

During his recent media workout, Rios spoke with Tha Boxing Voice’s Fernando Pimentel and explained that he got too caught up in driving forward, that he forgot to incorporate cutting off the ring against his opponents. He also mentioned that after a string of upsetting fights he has refocused his camp, team and himself to get ready for this fight.

“I do well with boxers,” Rios suggested. “It’s just I got so fixated on just walking forward (give a punch and take a punch) . . . I can cut the ring off, I can move around, I can do different angles but like I said I just forgot about all that shit. Now I’m back to where I need to be, I’m rejuvenated and I’m ready to get back to the top again.”

Rios (33-2-1, 24 KO’s) is a former WBA lightweight champion and admitted that success and money made him a “childish prick”. Rios first noticed himself changing for the worse after his first fight with Alvarado, when both men were still undefeated and Rios stopped “Mile High” in seven rounds. Rios was at a career high after that fight and explained that he became overconfident.

“I just got cocky, I was enjoying the ‘Yes Mans’ around me,” Rios said.  “I just became a little prick. I was confidence but cocky confidence. And I was just doing a lot of bullshit I shouldn’t be doing.”

The latest Alvarado fight was a career-saving performance for Rios who is hoping to get back on top with another win against Bradley.

Rios gave praise to his wife who he said helped him remember what he wanted to accomplish in boxing in the first place. He was “brought back down to earth” according to himself and now feels rejuvenated possessing the same hunger and drive he had when he started. Along with his wife Rios gave thanks to Robert Garcia, his trainer, and Cameron Dunkin, his manager, and said that he is dedicating this fight to them for staying by him and helping his career.

Rios has been inactive since January when he stopped “Mile High” Mike Alvarado in three rounds but instead of being offered another fight right away, he remained on the sidelines until landing the fight with Bradley. Rios has never been stopped in his 10-year-plus career and his two unanimous decision losses came at the end of twelve rounds against Alvarado and then Manny Pacquiao in 2013. In both cases, Rios lost on points because he allowed himself to be outworked and became too predictable for his opponents to figure out.

Rios is now 2-0 since 2013, but his 2014 win against Diego Chaves was a result of a disqualification, the reason of which could have been any number of fouls conducted by Chaves.

Now Rios is looking to get back on top with a victory over Bradley (32-1-1, 12 KO’s) whose resume includes wins over Pacquiao, Juan Manuel Marquez, and five undefeated scalps his most recent one being Jesse Vargas in June. Nonetheless, Rios is said that come November he will bring back a fire to the ring that saw him rise through the ranks and develop a reputation as one of boxing’s most passionate fighters.