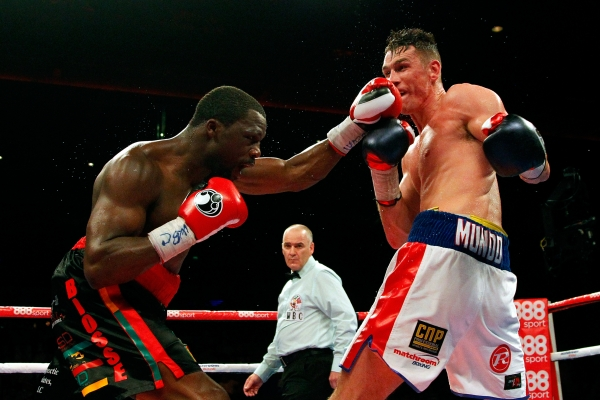 Callum Smith 12 (9) – 0, the proud holder of my esteemed greasy sizzling Kebab award. My UK prospect of the year 2013. I can’t recall the last time a prospect from these shores has presented such an icy cool composure when a scripted step up fight, has demonstrated itself to be worthy of a more respectable label.

The opponent Vladine Biosse 15 (7) -3-2 of course, aware of his purpose within the glittering proceedings of the big Liverpool bill. The template drafted for him? that of “the opponent”. The actual physical manifestation though, was a fighter determined to drape that noticeable eerie hush upon the home crowd and board the plane back, leaving nothing but an upset.

Many in the UK including myself become a little light headed and giddy when the vast potential within Smith is envisaged. A rising star at supper middleweight, 6 foot 3, hints of a particularly tasty punch (against this level of opposition at least), garnish this with a subtle dash of technical competency that borders on beautiful. I’m a big fan.

Let’s look at this Biosse tussle…

The work is clean from Smith as we begin. Long controlled punches off of a confident offensive start, despite this, Biosse is looking unorthodox and unusual; providing early glimpses of being a difficult puzzle to perhaps catch clean with any consistency. Biosse’s in theory, hard to time curling movements, slightly freestyle in nature, were unwoven before the second bell sounded. Callum’s right hands were slipping through cleanly, enough times to garner respect.

In the 2nd Smith is comfortable early on. Biosse is then backed up receiving solid and sharp looking shots. This awakens a response from Biosse, catches Callum, he takes it well, offering back more combinations. In the 3rd following a volley of accurate punches from Smith, an uppercut fired off almost sends Biosse’s head spinning into the cosmos. The Rhode Island Native’s legs temporarily sapped of drive.

Over hand swings from Biosse while admittedly viciously delivered with destructive intent, are way clear of any danger zone surrounding Callum in the 4th. Body shots placed with painful precision boom against an outclassed Biosse, pinned on the ropes. Patience; backing up and insisting with that pole of a right into his opponents face. Smith is in glorious control.

Callum eats a solid left as Biosse desperately seeks his way back into this thing, intent on displaying legitimacy as an opponent. Make no mistake Callum is caught, a noticeable retreat in his steps, despite his features masking any acknowledgment of the shot. In this 5th round though, Callum is presenting repeated reminders that justify the widespread faith in his talent.

From the 6th to the 9th round, despite some solid left hands from Biosse it’s pretty much all Smith, both men exhibiting a more modest pace, to be expected at this stage, they’ve generously donated a truckload of energy for us.

The chin snapping right uppercut near the 10th and final bell from Callum lands flush but still Biosse pushes forward attempting to give his enemy some kind of rebuttal. Smith, even in the final round is still suggesting he could continue on deep into a championship stretch.

Callum of course walks off the victor, impressing me with his reluctance to rely on solely power when the fight perhaps extended a little further than initially anticipated. An opponent who genuinely came to smear his record. A stubborn defiance from Biosse toward caving in, despite the delectable platter of accurate punches bouncing against his features for a disproportionate amount of the fight.

Is Callum Smith the truth? If the artistry continues with this much apparent skill, no question. I watch with interest.