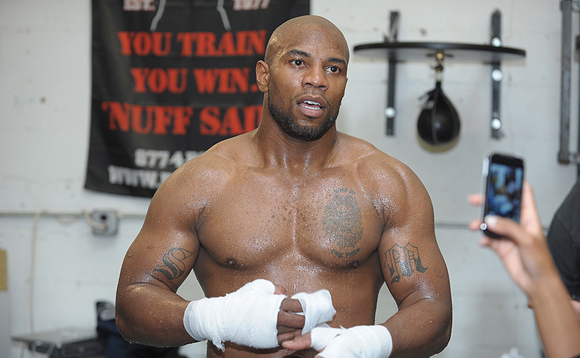 On February 16th at Boardwalk Hall in Atlantic City, Seth “Mayhem” Mitchell will step into the ring to face Johnathon Banks in a rematch of a November clash that ended with an emphatic 2nd round TKO of Mitchell.

Though their records, ages and specs share more similarities than differences, the path taken to Atlantic City by these two athletes could not be more in contrast with one another.

Prior to facing Banks, the former Linebacker for Michigan State was undefeated through his first 25 fights, with his 10 previous wins coming by way of knock out within the first 5 rounds.  Despite being a natural athlete, however, Mitchell did not pick up a pair of boxing gloves until 2006, when he was 24 years old.

By that time, Johnathon Banks, who is one month younger than Mitchell, had won the National Amateur Title at 178 lbs three times over, been on Wladimir Klitschko’s team for two years, and worked with Emanuel Steward at Kronk Gym for nearly a decade.

Regardless of a person’s athletic ability and level of motivation, there are certain windows within which an individual’s most critical development takes place.  For boxing it’s definitely not between the ages of 24 and 30.

Many believe that one has to simply put in the required time to condition one’s body and mind to not only excel in, but withstand, the types of things that you will encounter at the elite level of any craft, be it tournament golf, concert violin playing, tight-rope walking, or professional boxing.

In an interview with ThaBoxingVoice.com, HBO’s Max Kellerman said: “If anyone is serious about the American Heavy weight division, someone has to go to one of these football programs, not high school or college, but junior high school, grab these kids as they’re walking onto the football field, and see which ones have the temperament and the kind of personality to make it through the gym.  It can’t be when they’re 20 years old but when they’re 12 years old.  The ones who are tough enough to survive the boxing culture, by the time they’re 20-22 years old, it will result in the US having the best heavy weights in the world again.”

Put simply, the question is, if Seth waited until he was 24 years old, was it just too late? Sergio “Maravilla” Martinez did not walk into a gym until he was 20 and he defied all odds by becoming one of the greatest boxers of his generation.  Can Mitchell bounce back from his loss against Johnathon Banks, like Martinez did against Antonio Margarito nearly 12 years ago, to reclaim his position as a serious contender in the Heavyweight Division?

Long time assistant of Emanuel Steward, James Ali Bashir believes that we’ll get our answer on February 16th. “[Johnathon] is going to be the same guy that he was in the first fight.  As smart as [Mitchell’s] team is, I think it was a terrible mistake that they even chose Johnathon Banks.  He’s a guy that has been boxing with heavyweight champions of the word for 10 years. They’re going to get him knocked out again.”