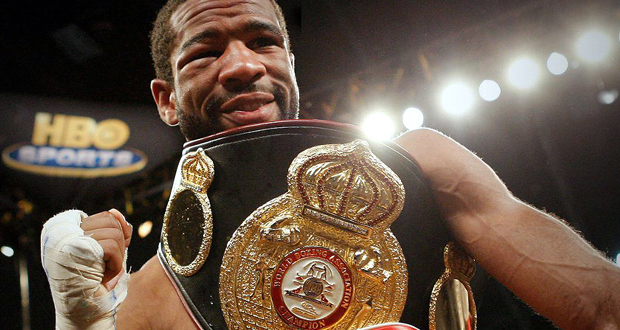 Golden Boy Promotions is pleased to announce the signing of IBF Junior Welterweight World Champion Lamont Peterson, adding another 140-pound title holder tothe most elite roster of fighters in the sport of boxing.

“We are thrilled that Lamont Peterson will be joining Golden Boy Promotions’ team,” said President of Golden Boy Promotions Oscar De La Hoya.  “We know firsthand what Lamont Peterson can do, as he’s been in the ring with our fighters Amir Khan and Victor Ortiz.  We know that he is the kind of individual that will be an asset to our team and great competitor in the 140-pound weight class.”

“I am excited about signing with Golden Boy Promotions and the opportunity to work with them again,” said Peterson.  “Being with Golden Boy really gives me the chance to make the best fights available in my weight class.  I want to fight the best in the world at 140 [pounds] and I know it can happen as a member of the Golden Boy team.  I am optimistic that this is a decision that will help further my career.”

An inspirational figure who, along with his brother Anthony, won the Boxing Writers Association of America’s Perseverance Award in 2008 for surviving a harrowing childhood to make it to the top of the boxing world, Lamont Peterson (30-1-1, 15 KO’s) doesn’t know the meaning of the word “quit.”  A native of Washington, DC, Peterson and his brother were homeless for a time before finding salvation in the sport of boxing when they were young.  Trained and mentored by Barry Hunter, Peterson thrived as a fighter, eventually winning numerous titles during a stellar amateur career.  When he turned professional in 2004, the success continued with Peterson eventually winning the WBO Junior Welterweight World Title in 2009.  He would lose the belt later that year to Timothy Bradley, but after going unbeaten in his next three bouts, Peterson got a shot at Amir Khan in December of 2011 and he made the most of the opportunity, defeating Khan and capturing the WBA Super and IBF 140-Pound World Championships in one of the best fights of that year.