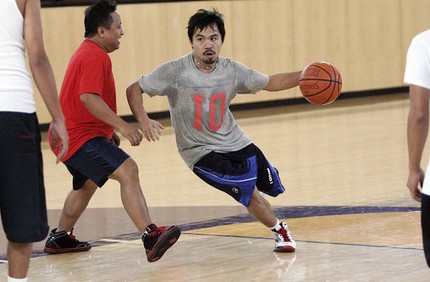 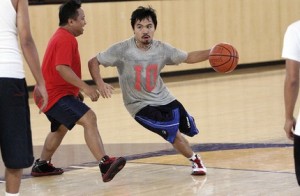 Manny Pacquiao has recently made his debut as a player-coach for the Kia Sorentos, of the Philippine Basketball Association. Pacquiao’s decision to actually suit up, and step into the court drew a significant amount of backlash from media members.

To the defense of Pacquiao, his participation in the game was only seven minutes, and he will not partake in any of his team’s activities till after his bout with Algieri.

People began questioning, why didn’t Bob Arum construct a contract that restricts Pacquiao’s freedom to play basketball. These types of measurements to keep a fighter safe are not uncommon for Arum. He explained, “I put it [certain restrictions] in the contract for our fighters who were motorcycle guys, and did a lot of crazy things. So there we definitely put it in the contract.”

The reason why Pacquiao was allowed more leeway in his contract was due to the relationship he has developed with Arum over the years.

Arum explained, “[Pacquiao and I] have a different kind of relationship. One based on mutual respect, and mutual trusts, so we wouldn’t put [any restrictions] in the contract.”

“When Manny said he’s going to play in the opening game of his team, I didn’t say anything because Manny had decided that he wanted to do that. Once that happened, we had a talk with him and he agreed he wouldn’t do it anymore until after the fight. That’s how it works when you’re dealing in an environment with all adults.”