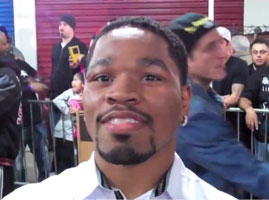 “I’m a little nervous , because of how young and courageous [Sergey] Kovalev is, but you can never count Bernard [Hopkins] out, he always finds a way,” Shawn Porter said in Las Vegas, NV as ThaBoxingVoice.com obtained an exclusive interview. It was that of a fable that Porter hopes to see the magic that Hopkins has shown us time and time again, but most widely viewed as “The Kelly Pavlik Moment.” When Hopkins fought Pavlik he was a heavy underdog and viewed as the critical fight to make Pavlik the next big star in boxing, what happened in the end was a one sided beat down as Hopkins outclassed Pavlik, who shortly there after had his career derailed by alcohol abuse related issues.

What is next on the plate for Porter? Porter simply stated that he will be there live scouting the Amir Khan vs. Devon Alexander fight.”I’ll fight anybody, a lot of big fights coming up I am starting to say Shawn Porter versus whoever.”

Porter to summarize his statement expressed the belief that most people in his division could be a champion, so he is eager to make big fight after big fight. Porter believes fighting the winner of Khan-Alexander would be really good for the division as it would be the best fighting the best. As for who Porter expects to face early next “I am going to go with Devon [Alexander],” as he predicted a rematch against Alexander whom he beat to win the IBF junior welterweight title.