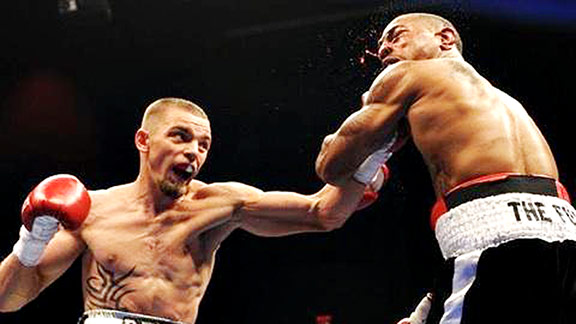 In the live televised co-feature, highly regarded undefeated prospect Ryan “The Polish Prince” Kielczweski (19-0, 4KO’s) puts his undefeated record on the line when he faces the once-beaten Ramsey Luna (12-1, 4KO’s) in an eight-round super featherweight showdown.

Since turning pro in late 2009, Redkach, a 2008 Olympic team alternate for his native Ukraine, has been on an absolute tear through the professional ranks. The tall southpaw is a tornado inside the ring with lethal knockout power in both hands. Redkach displays a frightening seek-and-destroy mentality from the moment the bell sounds. Eleven of his 13 knockouts have come in three rounds or less, with six coming in the very first round. The IBF #9 and WBC #10-rated USBA lightweight champion is coming off his most impressive victory to date, an exciting and dominant 10-round unanimous decision win over once-beaten Tony Luis on ShoBox in January. In Luis, Redkach met a slick and crafty boxer who was able to survive Redkach’s early onslaught and take the relentless Ukrainian into deep waters for the first time in his career. Redkach showed that he has more than one dimension though and was able to box and flurry with combinations down the stretch, ultimately earning him the well-deserved decision in what was a highly entertaining matchup. Redkach, who has been featured on Dan Rafael’s “Prospects to Watch” list on ESPN.com in back-to-back years, is honing in on challenging for his first world title. However, he must first get by the much more experienced and extremely dangerous Gulyakevich.

Nicknamed “The Surgeon” for his pinpoint punching accuracy, the 33-year-old Belarus-native Gulyakevich is currently riding a six-year, 15-bout winning streak, since dropping a controversial 12-round majority decision to then-reigning interim WBC super featherweight world titleholder Humberto Gutierrez back in 2009 in Gutierrez’ backyard of Mexico. Prior to the loss to Gutierrez, the then-European super featherweight champion Gulyakevich was coming off his most impressive victory to date, a 12-round unanimous decision against then-unbeaten and future WBC featherweight champion Vitali Tajbert. The only other blemish on Gulyakevich’s record came via seventh-round technical decision loss to 22-1 Alex Arthur in 2006.

Like Redkach, Gulyakevich is tall for the lightweight division, standing at 5’10”, and he is also a very aggressive fighter. Gulyakevich, now promoted by Joe DeGuardia’s Star Boxing, has been anxiously awaiting an opportunity to make a splash in the U.S. market for years, and is chomping at the bit to finally make his stateside national television debut against the red-hot Redkach. Gulyakevich is hungry to prove that he is one of the top lightweights in the world, and knows that a victory over Redkach, who many believe will be challenging for a world title in the very near future, will surely cement himself as one of the top 135lb. fighters in all of boxing.

The co-feature will see popular and exciting Massachusetts-native Kielczweski returning to Friday Night Fights just a little over a year after he scored his most impressive victory on the network; a highlight-reel one-punch knockout over the previously undefeated knockout artist Miguel Soto (11-0, 11KO’s). Before a loud and raucous hometown crowd who had made the short trip over from Quincy, MA, to Salem, NH, Kielczweski absolutely dominated Soto from the opening bell, before landing a monstrous left hook that sent his foe crashing face first to the canvas in the fifth round of their scheduled eight-rounder. The knockout was so impressive that it was voted as the fifth best play on ESPN’s “Top-10 Plays of the Day”. A 2007 and 2008 New England Golden Gloves champion and 2008 National Golden Gloves runner-up, Kielczweski is looking to make the transition from top prospect to legitimate world contender and another stellar performance on the nationally televised ESPN network will do just that.

Kielczweski is expected to have his hands full with Luna. The Mexican-American Luna is a hard-charging aggressive fighter whose lone defeat as a professional came at the hands of former amateur standout and now undefeated top prospect Toka Kahn Clary in December of last year. Luna lost a unanimous six-round decision but had Clary in trouble a number of times, dropping him twice badly before ultimately losing a razor-thin majority decision. Following the defeat to Clary, Luna bounced back with a unanimous eight-round decision in May of this year, and is now ready to throw his name in the mix of the top up-and-coming 130lb. fighters in the world with a victory over the highly regarded Kielczweski.