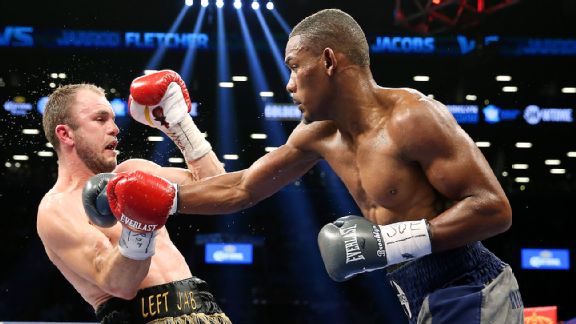 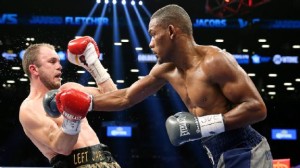 Daniel Jacobs came out extremely aggressively the first two rounds and it looked like he would get Fletcher out early.  However, Jacobs seemed to realize that Fletcher was perhaps more durable than originally thought.  By the third round Jacobs stepped off the gas peddle a little bit and started to box more. He continued in that fashion for the next few rounds letting Fletcher into the fight more than he should have.  At times he did a decent job working off his jab throughout the fight. Jacobs also showed that he is extremely effective at switching stances and does it in a way in which hedoesn’t make himself vulnerable.  However, in my opinion his punch output was lower than it should have been. When he decided to be active and put puncher together Jacobs looked good and effective. However, the problem was he didn’t do it as consistently as he probably should have.  But at the end of the night Jacobs earned himself a nice 5th round TKO win and a world title improving his record to (28-1, 25 KOs) while Jarrod Fletcher drops to (18-2, 10 KOs).

After the fight Jacobs expressed the fact that he wants to fight fellow New Yorker and middleweight titlist Peter Quillin.  He was quoted as saying, “The fans deserve it” (regarding a potential clash with Quillin) in his post fight interview after the fight.  Technically Danny Jacobs next fight should be against Golovkin since he’s the WBA “super champion” and Jacobs became the WBA “regular” titlist tonight.  But I must admit, a future showdown between the two New Yorkers seems like an enticing match up.