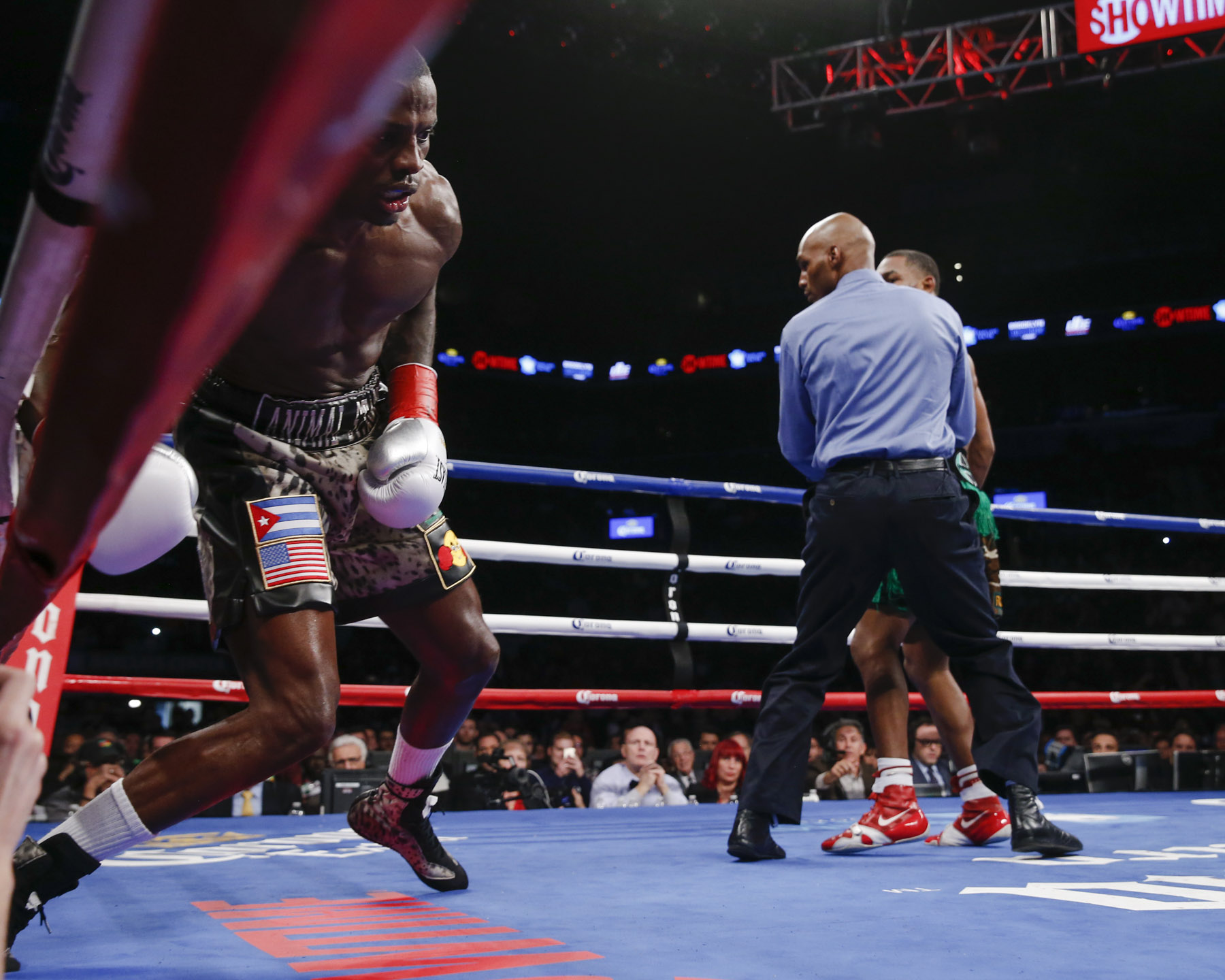 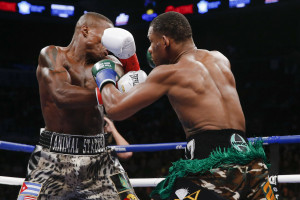 There was no real surprise when it was announced that Daniel Jacobs (31-1, 28KOs) was going to face off against Peter Quillin (32-1-1, 23KOs) to end the year. After all, the two middleweights under the Al Haymon umbrella have been on a collision course with each other for the past several years and it was getting closer as the opponent list narrowed down for the two.

It was, however, a shocking conclusion to their built-up rivalry as Jacobs crushed Quillin in the first round of their scheduled 12 round title fight at the Barclays Center in Brooklyn, New York. The fact that this fight ended in a knockout was not a surprise because both fighters combined for 60 total knockout/stoppages heading into the fight.

The disbelief was due to the fast nature of the fight’s conclusion. Jacobs finished the fight at 1:25 in the first, but he maintained control from the opening bell.

Both fighters started off jab-heavy in the fight, but Quillin was letting go of his right hand from very far out, presumably gauging his opponent and trying to figure out the proper distance. You can’t fault Quillin because no one would’ve guessed the fight was going to end so quick, besides, it is normal for a fighter to spend several rounds configuring distance.

If you blinked you would’ve missed it as Danny Jacobs landed a quick right hand on the chin of Kid Chocolate. The right hand came from behind a jab thrown to blind Quillin, and it worked to perfection.

That was the beginning of the end as Quillin took a couple steps back, although it was probably a combination of wobbly legs and retreat mode. That was all the advantage Jacobs needed as he quickly assessed his opponents status and began to pounce.

Quillin’s hands immediately went up as he did his best to block the vicious assault on the behalf of Jacobs. Jacobs unleashed several big right hands in a row as he tried to finish the fight with one punch.

Jacobs started to put both of his hands together and even though he wasn’t landing all of his punches, the ones that were getting through had a tremendous effect on Quillin, who managed to clinch out of desperation. Jacobs went to the body and Quillin fired off some shots of his own.

It was a final right hand that badly staggered Quillin. It looked as though Quillin would hit the canvas and referee Harvey Dock stopped Jacobs from coming forward, presumably because he thought a knockdown was inevitable. However, Quillin managed to stay on his feet, much to the surprise of Dock, who had his back turned to Quillin.

Dock took a long look at Quillin, although it was technically only a few seconds, before waving off the fight.

It was a bit of a bizarre ending, and controversial to some, but in the end it was a fair stoppage because Quillin was clearly out on his feet. Oddly enough, had Quillin went down he might’ve been able to receive a count that would’ve allowed him time to recuperate. Instead, Dock made a not-so-snap decision.

There really was no controversy as the replay showed Quillin’s glazed eyes and from Dock’s vantage point the fight was over. Still, you have to wonder why Dock called a halt to the action in the first place. Quillin never went down and Jacobs was in prime position. Had Quillin been okay to continue and Dock allowed the action to resume, the controversy would’ve stemmed from Jacobs having to reset his momentum for no reason at all.

In the end, the right call was made, even if it wasn’t conducted in the most appropriate manner. Still, it was better to stop the fight in a fluky type manner than to have allowed Quillin to take a few more unnecessary shots.

It was a strange moment in the aftermath of the fight. Jacobs deserves full credit and this should be a coming out party of sorts, pulling off the biggest win by far in his professional career, but there was a strange feeling after the fight. It seemed like everyone was in such shock that no one could believe what happened. That shock led to immediate criticism and doubt.

Some have stated that Quillin was never that good, some have said that Jacobs doesn’t deserve as much credit because it was only his biggest win by far based on the fact that he had beaten less than stellar opposition to begin with, and yes, of course, the notion that everyone is still playing second and third fiddle to Gennady “Triple G” Golovkin and Saul “Canelo” Alvarez, but more so “Triple G.”

It is unfair to bombard Jacobs with these excuses, even if there is some truth to them.

Jacobs won the fight, and he did it in the most thrilling and dominating style possible. It was a flawless victory.

We have seen the six best middleweights in the world to close out the year, and the best part was that they faced one another. Golovkin might be the best, Canelo might be the most popular, but it was Jacobs that delivered the most impressive outcome of them all. Even if he did not upstage the other top middleweights, he certainly earned a reason to be mentioned alongside them.

Prior to last night’s win, Jacobs was seen as a stepping stone for Golovkin. This win does not change his underdog status in the fight, but it does close the gap between him and Golovkin just a bit.