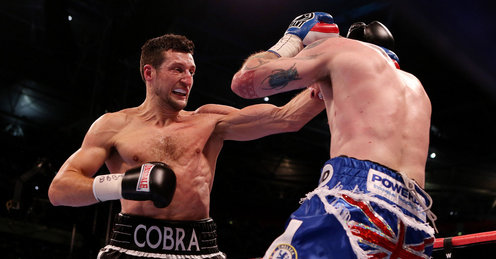 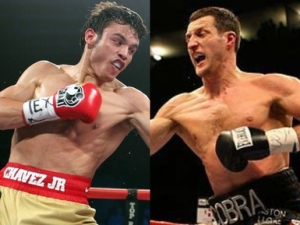 As a former Commonwealth, British and European super-welterweight champion, and current boxing trainer and pundit for Sky Sports, Jamie Moore has weighed in with his opinion on what is next for WBA Super World and IBF World super-middleweight champion Carl Froch (33-2, 24KO’s) as he nears the conclusion of a storied career.

It was looking likely that Froch would make final bout of his pro campaign with Julio Cesar Chavez Jr in Las Vegas sometime in May, but an untimely injury has thrown all the best-laid plans out the window. Froch had been mandated to defend the IBF portion of his belt against countryman James DeGale just before the new year. Froch was brazen in his dismissal of such a fight when he had his plans set in stone.

Moore spoke with skysports.com/boxing concerning Froch’s options this late in the game, taking into account Froch’s age and the gruelling fight schedule he has been keeping for the better part of a decade.

“I’m not sure but the one thing he can’t afford to do is take any risks or chances, because he hasn’t got many – if any – fights left in him. I can see why Carl made that decision, but if he has to take an unwanted break, I can only see him giving up the IBF belt – and that means James DeGale gets title a shot. Given the elbow injury, it’s more likely Froch will hand back that title than fight DeGale; that’s for sure.”

That makes sense. DeGale offers much difficulty to overcome in the ring, with his awkward southpaw style and fast hands. It would likely be another occasion where Froch would need to charge forward, taking whatever was thrown at him to break down the younger man. At this point, DeGale’s name won’t generate the kind of revenue to make that sort of effort worthwhile. That’s why the Chavez bout would have been Froch’s preferred option; a less troublesome evening against a less sophisticated opponent for more money.

Moore believes that if Froch doesn’t get his way in this instance then there is only one thing he will do, especially when considering the connotations of a certain picture Froch recently posted on social media.

“We all saw those gloves hanging up on Twitter, and I wonder whether we will see Carl again, I really do. He admits he likes a pound coin, but we also know his legacy is important to him. As time passes, that magical night at Wembley Stadium, that occasion, the brilliant knockout of a bitter rival: will he just walk away with those abiding memories? That would be some finish to a fantastic career. I know he really wants that Vegas fight, but I honestly wouldn’t be surprised if he doesn’t box again.”

Is the prospect of one more payday enough for Froch to perhaps ignore disagreeable circumstances and step back into the ring at a battle-worn 37 years old? If Chavez isn’t available by the time his injury is healed, possibly sometime in the summer, DeGale may have already fought for and won the IBF title Froch has vacated. Froch’s promoter Eddie Hearn could weave a storyline around that and manufacture more interest in the fight than could be generated right now. It’s still going to a long evening for Froch against the second young lion in succession after his two battles with George Groves. And it still won’t be as lucrative as a Chavez fight.

Moore has spent enough time with Froch for his opinion on this matter to carry some weight. The rematch against Groves that Froch emphatically finished with the best one-punch knockout out of his life, in front of the biggest crowd he will ever fight in front of, and on home soil to top it all off, just may be the best way to finish a career.