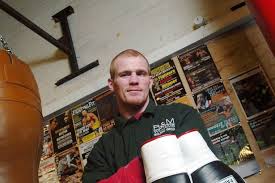 Jason Cook says he has shelved his retirement plans for a second crack at the Prizefighter Welterweights 4 on Saturday at the sold out York Hall, Bethnal Green, live on Sky Sports – and the veteran will then target a Commonwealth title shot.

The former European Lightweight champion was set to call it a day after he faced Tony Pace for the Celtic Welterweight title in Cardiff in February, but when he stopped Pace in style in the fourth round to win the title, that convinced the 39 year old to lace them up again in east London.

“I recovered well after the Pace fight,” said Cook. “As I have got older the body has responded better, I don’t know why. The training is going great, I am with a youthful trainer who is giving me different methods and I just love the sport still. I couldn’t turn this opportunity down.

“When I boxed in Prizefighter four and a half years ago, I lost to Gavin Rees in the semi-final and there was no shame in that. That got me a British title shot, so winning Prizefighter could give me another title shot. There are a lot of good prospects in it who will be looking to build off Prizefighter as well.

“I am confident of winning, but it is a three-round shootout, a penalty shootout in a sense. As long as I perform to my standard I am capable of winning it. I will see how my body responds afterwards. If I look terrible in Prizefighter, then yes I will call it a day, but it I look good while I am in it then it is just seeing how the body responds really.

Cook rolled back the years with his destructive win over Pace, the 21 year old from Talbot Green who had tried to stoke the rivalry with the Maesteg man in the build up to the clash. Cook landed his 16th win inside the distance from 30 triumphs in his 18 year career, and he’s looking for more on Saturday.

“I had so much abuse off him through social media and I don’t go for that sort of thing, I let my fists do the talking and I knew my experience was way too much for Tony Pace,” said Cook. “He is a nice lad and his record is misleading, he just hasn’t been brought up the right way. If I lost to him you would never see me in the ring again, I would have been too embarrassed.

“With the £2,000 bonus it would be nice to get some early finishes. I was looking and I have 16 knockouts, and I think the most wins by somebody in this Prizefighter is Dean Byrne with 17 wins. They will look at that and think, ‘this guy can punch a bit’. In this tournament I don’t think it is about the punching, because it is only three rounds and sometimes it takes a round for somebody to warm up. Luckily, I start off quickly anyway so I do have a chance with the punch, because people are going to leave themselves open as they try and win that first round.”

John Ryder faces Jez Wilson in a British Middleweight title eliminator in between the semi-finals and final of Prizefighter while two more London stars are on display at the home of boxing as Wadi Camacho warms up for his grudge Cruiserweight clash with Stephen Simmons with a four-round contest while talented Light Welterweight Ricky Boylan returns to the ring following a hand injury.