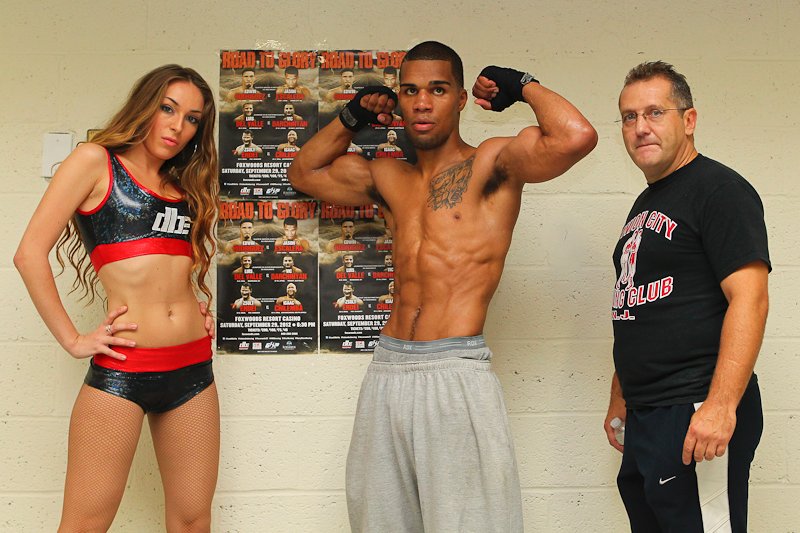 The event is promoted by DiBella Entertainment, in association with Joe DeGuardia’s Star Boxing and Gary Shaw Productions.  All three bouts will be aired on HBO’s Boxing After Dark beginning at 9:30 p.m. ET/PT.

Below are quotes and photos from the workout

JASON ESCALERA: “I had a very good camp for this fight and I feel great.  I am already on weight and I am really looking forward to Saturday night.  I know that some people feel that I might be in over my head, but I can assure everyone that this fight is coming at the perfect time.”

“I have been hearing things out of Edwin and his camp that he is going to put on a show, he is going to stop me and that Donovan George hits harder than I do.  If he truthfully believes that, then he is going to be in for a big surprise on Saturday night.  First off, I hit much harder then Donovan does, and I can assure you that he will find that out in the very first round.  Also, I have never been down in my entire career.  Not in the gym, not in the amateurs and not in the pro’s.  That being said, there is no shot that Edwin can knock me out.  If he thinks he is in for an easy night on Saturday then he better think again.”

JOE BOTTI: “This was the best camp Jason has ever had in his career.  We had a full, hard eight weeks of training.  We were sparring with the likes of Danny Jacobs, Glen Tapia, Joe Smith, Seanie Monaghan, Demetrius Hopkins and Jesse Hart, all top guys.  We were working on a number of different things with Jason in camp, but mostly his defense and him working behind his jab.  Edwin has been saying that he is going to go toe-to-toe with Jason, but we know that as soon as he gets hit with that first shot that he is going to start moving.  We have prepared for that though, and Jason will be ready for whatever Edwin brings to the ring on Saturday night.

The event is promoted by DiBella Entertainment, in association with Joe DeGuardia’s Star Boxing and Gary Shaw Productions.  All three bouts will be aired on HBO’s Boxing After Dark beginning at 9:30 p.m. ET/PT.

“Road to Glory” is the highly anticipated HBO Boxing After Dark tripleheader, featuring some of the brightest young fighters in all of boxing looking to continue on their paths toward their respective world championships.  The card will take place on Saturday, September 29, at MGM Grand at Foxwoods.  Tickets are still on sale and can be purchased through the Foxwoods box office by calling 1 (800) 200-2882. Tickets are priced at $45, $75, $100 and $200.