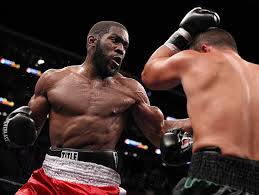 Undefeated heavyweight Bryant Jennings cut a very frustrated figure when speaking with Nestor Gibbs (@nesgto) about his immediate future. Jennings is tantalizingly close to the apex of the division after earning the mandatory challenger’s position for the WBC version of the heavyweight belt, with a win over a then undefeated Mike Perez in July of this year. However, he is in the agonizing position of having to await the outcome of the fight between the champion Bermane Stiverne and his immediate challenger Deontay Wilder, the date for which is yet to even be confirmed as the process is repeatedly prolonged, first by an injury to Stiverne and now as purse bids are yet to be settled. He did not hold back in his assessment of the situation. “I don’t even understand how it can drag out like this. Somebody needs to get their f**king neck wring the fuck out. It’s ridiculous. Somebody either needs to vacate that title or do something about that because we can’t have that. It ain’t fair.”

His vexation must be compounded by the lack of a target to attribute the blame to. As Mr Gibbs pointed out, this is just the latest example of where a fighter under the managerial umbrella of Al Haymon (in this case Deontay Wilder) has had a bout postponed due to complications during purse bid negotiations, but it seems Jennings is reluctant to make any accusations even if he knows who to level them at. “I don’t even want to start pointing the finger because I’d rather point the fist, but I don’t know exactly what is going on. Boxing is 90% business, 5% boxing and 5% personal.”

Then, the observation was put to Jennings that as his career has progressed, boxing fans have seen less and less of him. This is rather routine as a fighter grows and improves and gets involved in bigger fights, but in addressing the situation Jennings revealed how he views his current status in the game. “You see less of me because at the top it’s very lonely. At a mandatory spot there is nobody else to fight but the champ for the belt. When I’m the champ, however many fights they want me to have a year, you can line them up and bring them on, but right now my position is here. I have it, I’m holding it, and I’m just waiting for the green light. I don’t have to fight for anything anymore. I’ve proved everything. I’m not fighting just to be fighting. I’m not trying to get back in position. I’m in position already. You don’t see nobody with a mandatory spot taking on these crazy fights. Every fighter fights to get a title shot, I have one therefore I don’t have to fight. I can wait around, I can do whatever I want.”

You can feel the righteousness oozing out of his mouth when he speaks these words. This is a man who feels he has earned his position as the challenger to the heavyweight championship of the world, and he is acutely aware that it all goes down the drain if he takes a risky fight while he waits for his chance, and suffers a shock defeat. This is a man who is goal-orientated, who has weighed up the alternatives and is clinical in his evaluation of his options while he waits in a pugilist’s purgatory; “Klitschko has a mandatory for the WBA and the IBF so that situation is all tied up. So other than that I could try and get a mandatory for the WBO and wait for Klitschko to have two more fights, so either way you look at it I’m in a waiting situation.”

He paints a very bleak picture of his current predicament, but signed off on the subject with something a little more optimistic, “I’m very patient and regardless how you look at it I’m still going to have a title shot in my next fight.” True enough, but the wait for his shot at the title will be more painful with each week and month that passes by, and we can only hope that if this means he remains out of action for a prolonged period, that the absence of competitive action hasn’t dulled his skills by the time he gets his opportunity.