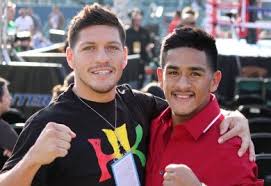 “It’s been great, I have been training for my fight October 25th in Fresno [California] and it’s been going great, working with Joel Diaz, he does tremendous work. Me and Diego are in tip-top shape.” said Jessie Magdaleno about his head coach Joel Diaz. “[Diaz] has the experience we need, he has been in the ring with a lot of world title guys and that’s were we’re at,” said older brother Diego Magdaleno when commenting on working with Diaz.

Diaz, a mastermind of the boxing gym is most known to date for Timothy Bradley due to his high profile fights over the past three years or so, but has been building a stable of fighters in the desert for quite sometime. The Diaz experience though is unlike a lot of trainers as earlier this year I encountered Diaz for the first time and talked with him. The conversation stemmed over a fighter he corned once again on Friday night, Diego De La Hoya. Diaz remembered every punch from the fight if you asked a specific question about the fight he would sit and reflect and give a very thoughtful answer as well as giving a honest critique of De La Hoya as being “an unpolished diamond,” a metaphor that I stole for my work in academia later. It was also a very candid introspection that came off as if a fighter wasn’t doing enough to prepare, he would let them know.

Diego Magdaleno left trainers Pat Barry and Augie Sanchez in May of 2013 and enlisted Joel Diaz. In August Jessie Magadaleno would join his brother as joining the the camp out on in one of the hottest areas of the California. The change has shown improvement in both fighters, but a dramatic increase in power for Diego Magdaleno, who has since losing a split decision to Roman Martinez for the WBO Super Featherweight title, has stopped one foe and also dropped another foe in his most recent endeavor when he fought Oscar Bravo at The LA Forum. Jessie hasn’t had a fight since the switch that didn’t end in a knockout as well.

“In every aspect [Diaz has improved us] from the sparring to the workouts to the way that things are arranged, everything has purpose and Diaz knows what he is doing.” Diego Magdaleno said when speaking of Joel Diaz methods of improving his fighting style. Diaz is that word you hear when referred to great trainers like Virgil Hunter, Eddie Croft or say a Jairo Escobar, he is a scientist. It goes back to an old adage that nerds win fights and Diaz makes the fighters in his gym become students focusing on his curriculum first and foremost making them masters of the aforementioned traits he instills.

Yet with that grandiose description aside, Diego Magdaleno explains that one of the other keys is something very simple, just having fun. ”If you can’t enjoy what you are doing then find a good thing [in it], we are always serious in the gym, but we are human and we have to have fun.”

Recently it was the relationship between the Magdalenos and Victor Ortiz that saw photos surface on the internet of Ortiz training in Joel Diaz’s camp. “When I first got with coach, I kind of pitched it to Victor [Ortiz]. There was nothing like ‘you have to do this!’ I wanted him to find it on his own. A couple of fights into our camp and Victor [asked] ‘Hey, do you think it would be cool if I come train with you guys and train with Joel?’” Diego Magdaleno explained. Magdaleno went on to explain, it was simple from there as he simply helped set up the meeting as well as that it was Ortiz’s decision rather than himself trying to drag Ortiz into the camp.