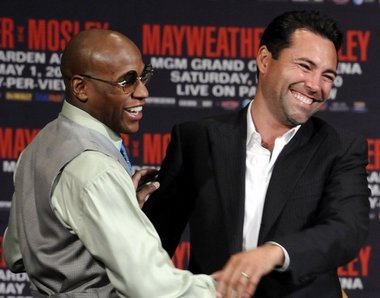 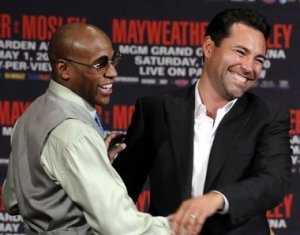 Loyalty, in boxing, seems to be an illusion and with Floyd Mayweather the world loyalty has a whole different definition than it does for the rest of the boxing world.
Weeks ago a report came out about Mayweather discrediting Showtime and All Access when he was called in to a meeting with the Nevada State Athletic Commision about some of the occurrences that had happened leading up to his rematch with Marcos Maidana. Mayweather had stated that the “doghouse” on All Access (which has been featured on HBO’s 24/7 as well) was all made up and the scene where he was surrounded by women smoking marijuana was staged. So Mayweather had no credibility and no loyalty to Showtime but in a recent interview with FightHype.com he changed his stance on loyalty and then blasted Oscar De La Hoya when the subject of Saul Alvarez jumping over to HBO to rival him
“Oscar De La Hoya has always been disloyal. Very disloyal,” said Mayweather. “He was very disloyal to Richard Schaefer. Richard Shaefer built the company from the ground up. I don’t have anything against Eric Gomez at all but De La Hoya is a piece of shit! Oscar is a snake. Stephen Espinoza, he’s been more than fair. It gets no bigger than Showtime. If they (De La Hoya, Alvarez, HBO) feel like they can compete, well then than let’s see.”
Mayweather also made it a point for fighters to not trust De La Hoya and to make the move over to Mayweather Promotions.
“Like I said before, Oscar is a snake. Any fighter that is in boxing now keep a close eye on Oscar. He’s a snake. If you want to be treated fair, come over to Mayweather Promotions.”
Mayweather does come accross, as in the past as hypocritical. His loyalty to the network did not seem to be there when confronted by the NSAC and telling fighters to come over to his promotion when he has been criticized for not giving his fighters the attention they need and the exposure to shine brighter than their current situation. Mayweather is entertaining and I enjoying watching him  as I do any other boxing event but  because he is the pound for pound king does not mean he gets a pass on his b*llsh*t and there is no reason he can do something then call someone else out for doing the same thing.
Tweet