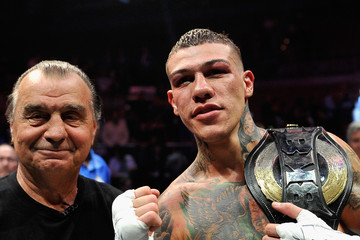 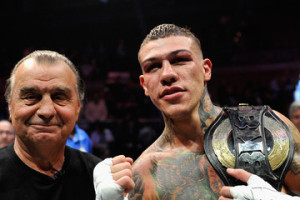 Jesse Reid is an old school boxing coach who has a list of notable champions that he has worked with ranging from Roger Mayweather to Johnny Tapia. On December 6th, Reid’s newest protegee Gabriel Rosado will step foot in the ring against hard hitting David Lemieux. The two meet over the common bond uttered in the first sentence of this piece, “Old School.”

“What I like about Gabe [Rosado] is that he is kind of an old fashion fighter, very dedicated, hard worker [and] great speed. I think I am tapping into his boxing ability, but at the same time I like his aggressiveness.” Reid explained. Rosado recently suffered a woe of loses starting with unsettling bloody loss to Gennady Golovkin. Rosado, who recently beat Brian Vera by knockout in a BKB event, think MMA (UFC) gloves on a wrestling mat that is enclosed by a circle that is called the pit.

It was Rosado’s first fight without Briscoe and it appeared that change of some sort was needed as he looked refocused and honestly more of the old Rosado, the NBCSN fighter, the one Main Events was pushing in 2012. “This is my second camp with [Rosado], the first one we won the BKB and we stopped somebody that everybody thought would give him a hard time,” Reid added

Reid began to remark about how Rosado since training with him has began to hit angles better and become more of an elusive target. This was evident when Robert Garcia who commentated the BKB event, made note of this during his fight on the telecast. Another focus is for the jab to stay busy. “We are trying to take him back to the old school stuff,” Reid claimed.

In therapy there is a thing called a therapist/client relationship that functions as an intervention tool, that if a client trusts a therapist enough they can try new things based on trust with the therapist. Well, Reid explains to ThaBoxingVoice.com that essentially he has a trainer/boxer relationship in which he can encourage Rosado to not always engage and due to the relationship they have as Rosado naturally wants to get nasty and engage in some wars.

“[Rosado] takes honest information and feeds off it, he is really starting to get in his zone right now,” Reid said.

All of this sounds well and dandy, but enter Lemieux, a man who can crack. Sure, Lemieux has lost to two fighters we do not deem elite, but his power is a clear and present danger and question marks remain around the face of Rosado, who after the Golovkin fight appears prone to cuts. Reid doesn’t seem concerned though. “I have seen him fight two or three times, I like that [Lemieux] tries to load up on punches and seems to be at the same speed all the time. We are going to try expose that and then try and take his strength away.”

Reid also noted that he believes that Rosado will come out looking the better of the two as well as have some fun in the later rounds. One of the better match-ups of 2014 takes places December 6th at the Barclay’s Center in Brooklyn, NY and live across the country on HBO.