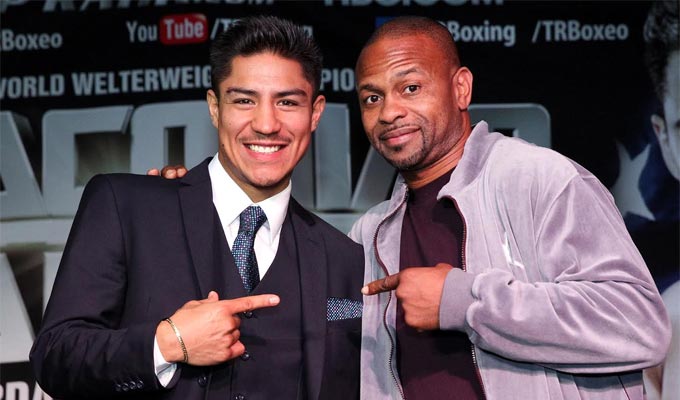 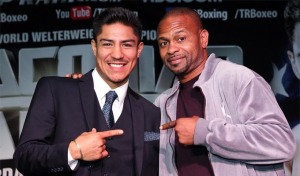 The sub plot thickens! When undefeated World Boxing Association (WBA) super lightweight champion JESSIE VARGAS makes his second title defense, against former world champion ANTONIO DEMARCO, on the MANNY “Pacman” PACQUIAO vs. CHRIS ALGIERI World Welterweight Championship pay-per-view undercard, it will be more than a battle between two Mexican warriors, it will be the first time FREDDIE ROACH and four-division world champion ROY JONES, JR. have worked the same fight as trainers from opposite corners. Furthermore, Jones will be doing the commentary on the remaining pay-per-view telecast fights.

How did the Vargas-Jones partnership come to be?

“I called Jessie’s fight on HBO when he fought [Anton] Novikov last August. Jessie won but I did not see the improvements I was hoping to see,” said Jones. “He asked me to train him for the DeMarco fight and I agreed. I am working with five fighters right now but Jessie is my first champion. We worked on Jessie’s mechanics for the first four weeks before we began sparring. He’s developing more speed – and more speed means more power. My plan is to work Jessie’s corner in Macau, then go back to ringside and call the fights for HBO Pay-Per-View.”

” We met for first time at his gym for a fundraiser and right out of the blue
he said he would like to give me tips on how to throw punches with much more power,” said Vargas. “So I took him up on his offer and the very next day, in his gym in Las Vegas, he showed me a couple of things. I was intrigued by his method of teaching. That’s when I asked him if he would train me. He accepted and I am very excited to be working with Roy. He has so much to teach me. He knows all about power – who can ever forget Roy’s big hook? His in-ring positioning is the best and that is what he is teaching me. Already I feel the power. I am fighting my third straight left hander in DeMarco. We’ve had three left handed sparring partners in camp. It’s a thrill to be trained by Roy Jones. He not only tells you about a certain move but can show it to you, too. When you are a champion there are challenges and you have to keep improving yourself. I have a lot of stake in this fight. Manny is moving down to 140 lbs I am told. He is on my radar for the biggest fight of all.”

Vargas (25-0, 9 KOs), of Las Vegas, NV., will be fighting outside the U.S. for the first time in his professional career. He captured the WBA super lightweight title on the April 12 Pacquiao-Timothy Bradley Jr world welterweight title rematch in Las Vegas, winning a unanimous decision over undefeated defending champion Khabib Allakhverdiev. It was a close and competitive fight that proved Vargas’ grit as he bit down hard during the championship rounds to pull away with the victory and the world championship belt. His impressive resume includes victories over former world champions Stevie Forbes and Vivian Harris and top contenders Josesito Lopez, Lucky Boy Omotoso, Ray Narh and Lanardo Tyner. In his last fight, on August 2, Vargas successfully defended his title against undefeated contender Anton Novikov via a unanimous decision.

DeMarco (31-3-1, 23 KOs), of Tijuana, Mexico, captured the WBC lightweight championship crown on his second try, winning the vacant title with an 11th-round stoppage of top-rated contender Jorge Linares in 2011. DeMarco successfully defended the title twice during his one-year reign — both by knockout — against Miguel Roman and John Molina. Since moving up in weight, he has won three straight fights, with two of those victories coming by way of knockout. In his last fight, on August 23, DeMarco won a 10-round unanimous decision over Landro Tyner.