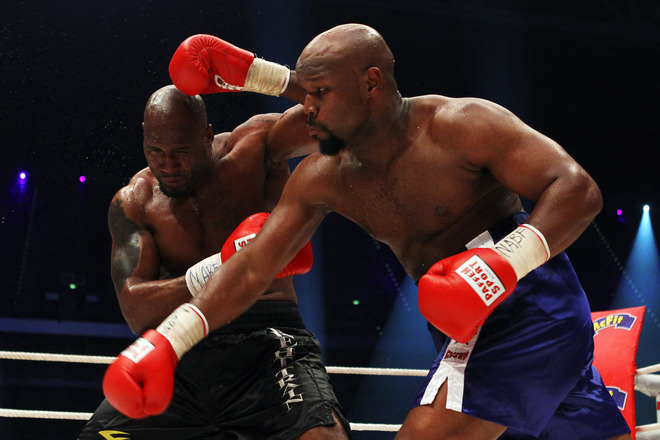 In November of 2012, after Hurricane Sandy had torn through the boardwalks and attractions of the Jersey Shore, Johnathon Banks got into the ring at Boardwalk Hall in Atlantic City, NJ. Banks was the underdog in his fight against Seth Mitchell, who was being touted as America’s number one heavyweight. Banks won in stunning fashion, stopping the fight with his magnificent right hand power.

They are doing it again. Banks, on Tha Boxing Voice TV, explained that there is a rematch clause and that is why the two fighters would be going toe to toe for a second time.

“I’m not riding on a high because of the last fight,” he said, continuing to explain that going into their first match that he never let Mitchell’s KO ability get to him. “I’m focusing on Seth Mitchell. He had a rematch clause and chose to use it. I’m not looking past him, I’m just focused.” “I feel like I was better than the guy then and on the 16th I will be better than him again.”

Banks has a history in boxing, spending much time studying under legendary trainer and commentator Emmanuel Stewart. “Emmanuel was a man who if he knew nothing, he knew boxing, It was a pure pleasure to work with him.”

After the passing of Stewart, Banks became the chief trainer of Wladimir Klitschko, the Heavyweight champion who had been under Stewart for quite some time. Wladimir fought a title defense shortly before Banks’ own fight in Atlantic City. Many say that it would cause distractions in his training for his own fight, and he still hears from others that he can train better for his rematch with Mitchell since Klitschko will not be fighting. “It is a lot of concentration involved; I didn’t feel that being in that predicament would be a distraction. A lot of times in boxing you have to make an adjustment, so I made an adjustment and usually in boxing the one who makes the adjustment wins.”

Earlier in the year the team at Tha ‘Boxing Voice went on record to pick Banks over Mitchell, Banks seemed to appreciate the gesture as he explains “You were the only ones to do that, you and the four people I brought to New Jersey with me. Atlantic City is an all Mitchell crowd and when they called my name four people cheered.”  Banks however, sees the win as bittersweet, “From November 10th on I see my career as bittersweet ‘cause he is not here with me, but I know he is watching,” he says referring to Emmanuel Stewart.

A lot of names were thrown out about Banks’ next fight, until Golden Boy (Mitchell’s promoter) decided to exercise their rematch clause. “I was able to sit down with the brothers and figure out their plans but nothing could be done due to the rematch clause.” The Brothers, The Klitschko Brothers, happen to hold all of the championship belts in the Heavyweight division, the very division that Banks represents. The situation may arise where Banks becomes the mandatory challenger for one of the belts held by the brothers. “I’ve thought about it, Vitali and I used to joke about it. I don’t know, I’m going to talk to both of them together and see what they are going to do but at the rate we are going a title is in my immediate future.”

As far as the heavyweight picture Johnathon Banks seems sold on Philadelphia prospect Bryant Jennings. “He is coming up fast,” and as far as a fight with Jennings is concerned “I’m willing to entertain it because this is the business that I’m in but why would we do it right now?”

The Klitschko’s are not new to the game, and as a friend and part of their camps Jonathan gave us a peek into what he thinks their futures might entail. “I see Vitali leaving soon. Vladimir will leave soon, but not as soon as Vitali.”

For Full Audio Of This Interview Click Here: http://www.mixcloud.com/boxingvoiceradioshow/larry-merchant-johnathon-banks-orlandito-de-valle-thaboxingvoice/