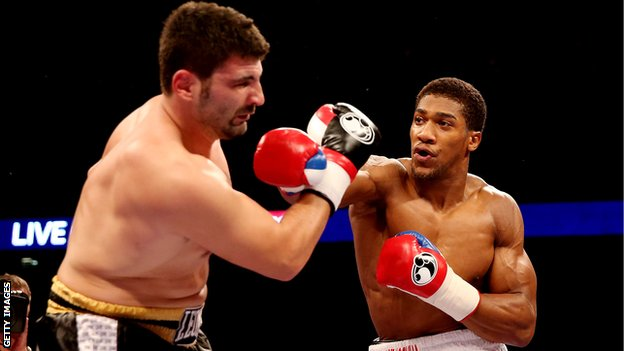 Anthony Joshua MBE says he can’t wait to box at the ExCeL in London once again as he prepares to return to the scene of his Olympic triumph on December 14, live on Sky Sports – but says it’s also time to move on.

The Gold medal hero brought the curtain down on Team GB’s sensational London 2012 Games in style on August 12, coming from behind to beat Roberto Cammarelle in a heart-stopping final in east London.

The 23 year old steps back into the venue to face Dorian Darch in his fourth pro contest on Matchroom Sport’s stacked Christmas bill, and while Joshua is excited to be back at the ExCeL – but says it’s time to look to the future.

“I will never forget the Games and especially that incredible Sunday when I won the Gold. I’m thrilled to be back there again and all the memories will come flooding back as it was indescribable.

“I’m at the start of a fresh new chapter now though, the Olympics was amazing but it’s in the past. I am loving life in the pro ranks and learning every day. Dorian is a tough test for just my fourth fight and he’ll want to make a name for himself, as all my opponents do.

“I am grounded, I am focused and I am taking every fight very seriously. It’s vital that I keep winning and keep learning because one lapse of concentration in the ring could be disastrous.”

Joshua’s return to the ExCeL is part of a huge night of boxing on Sky Sports.

Like Joshua, Olympic Bronze medal star Anthony Ogogo revisits the setting of his triumph at the London 2012 Games and also fights for the fourth time in the paid ranks, while recent IBF Bantamweight king Jamie McDonnell is out for the second time in four weeks. Two-time World Middleweight title challenger Martin Murray is also back in action against Sergey Khomitsky.

There are two tasty Southern Area title clashes as Tony Owen defends his Light Welterweight strap against fellow Carshalton man Ricky Boylan, and Ryan ‘Crash Bang’ Taylor meets Floyd Moore for the vacant Lightweight belt. Danny Connor lost to Owen in their October meeting for the title, and he is in an eliminator for the English Light Welterweight belt against Tyler Goodjohn.

Erick Ochieng is back in action after his battle with Liam Smith for the British Light Middleweight title, moving down to Welterweight to face Welshman Dale Evans, unbeaten Super Flyweight Kal Yafai moves into double figures in the pro ranks, there’s a welcome return to the ring for unbeaten Lightweight prospect Martin J Ward, Essex Light Welterweight John Wayne Hibbert looks to build on his British Masters triumph and Cruiserweight duo Wadi Camacho and Ben Ileyemi complete the line-up.