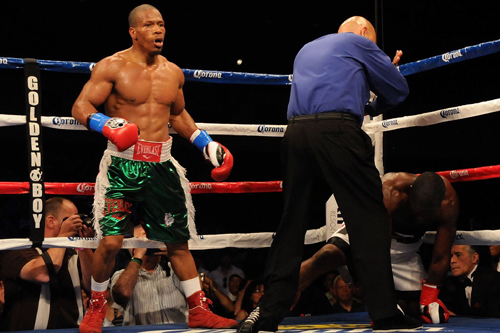 Fresh off his victory over Joey Hernandez, Cornelius ‘K9’ Bundrage is back in line to get a title shot, the same IBF title he lost to Ishe Smith last year. But Bundrage is ready for his shot at a title and a rematch with Ishe Smith.

“I still haven’t seen my last fight but they all said the old K9 is back and that’s what I wanted. If Ishe gets that belt, He’s going to see what time it is. That’s going to be my belt,” Smith told ThaBoxingVoice.com.

Bundrage’s last fight was on a Golden Boy promoted show, although it was not televised. So Bundrage has decided to become his own boss.

“I got my own promotions; I’m no longer with Golden Boy. I signed with K9 Promotions. I see how these brothers do business and I said I got to do the same, if it makes dollars it makes sense.  I’ll be under my own banner in my next fight. I don’t have a date set but we’re waiting on the Molina situation to be worked out. I’m just staying ready and ready to get that belt back and become a 2 time world champion. I’m number 1 in the IBF and I ain’t going nowhere,” stated Bundrage.

Right now the IBF Jr. Middleweight Carlos Molina is locked up in a Las Vegas detention center. His fight with Jermall Charlo was scrapped from the Canelo-Angulo show. Molina and his title have a very shaky future at the moment so the question was posed to Bundrage about a possible K9-Jermall Charlo fight. Bundrage shot that notion down and stated, “I don’t think so on Charlo-K9. Charlo is ranked number 10 so when he was going to fight Carlos Molina, it wasn’t a mandatory. And Molina was going to get a nice check doing so. That’s why Molina gave him the shot. It was unfortunate that Molina got locked up and he missed his opportunity but I’m a mandatory so I’m going to get my shot.”

While Bundrage has stated he wants revenge with Ishe Smith, Smith’s opponent May 2nd in Las Vegas is WBA champion Erislandy Lara. Bundrage feels any fight can be made as long as it makes sense even if he is loyal to the IBF.

“Lara is ok, he got the regular belt I don’t know about the full belt. That’s why I like the IBF; they only got one belt while the rest has too many belts, that’s why I stick with the IBF. I don’t know if I’m a regular champ if I fight for other organizations. I’ll fight anybody if the moneys right. It just got to make sense. I want to fight the best fighters out there. When I was world champ I should have been fighting other world champions. Instead of getting Canelo, they (Golden Boy) were trying to push Lara on me and he wasn’t a world champion. I wanted Canelo that’s why I signed with them but I never got that.”

Even though he is no longer with Golden Boy Promotions, Bundrage says there is no rift but felt he had to do what was in his best interest.

“Golden Boy is ok. Don King is ok. Every relationship isn’t going to be peaches and cream, it’s just relationships, they ok but it’s just time for me to move on and do my own thing and that’s what’s best for me,” stated Bundrage.

Boxing isn’t an old man’s game but K9 feels he has plenty of left as he finishes up his career.

“When I leave, I’m a leave at top. I’m not going to retire on the bottom but leave on my own terms. Bernard Hopkins fighting at 50, Thompson won at 42 last week. Floyd is 3 years from 40. I still got years on me. I’ll retire when I get bored; right now I’m fired up. I already made history, at 37 years old I become the oldest IBF world champion. I became the first world champion out of Kronk since Tommy Hearns. The late great Emmanuel Steward was on my corner for that.”

Bundrage’s last fight was untelevised and he made less than what he normally makes but he says sometimes dollars aren’t the only thing that makes sense.

“I turned fights down for $75,000 and $150,000 because it made no sense. I took a fight for $5500 because it made sense. It didn’t make dollars but it made sense because I’m a quadruple that my next fight. Thank God Canelo is fighting better opposition now because I’m coming for him after I get this belt. Ain’t too many other people he can fight at 154, so I’m here I aint going nowhere. I guess I got to get older for people to want fights with me.”

Bundrage has the rest of his future in sights and has it perfectly vision.