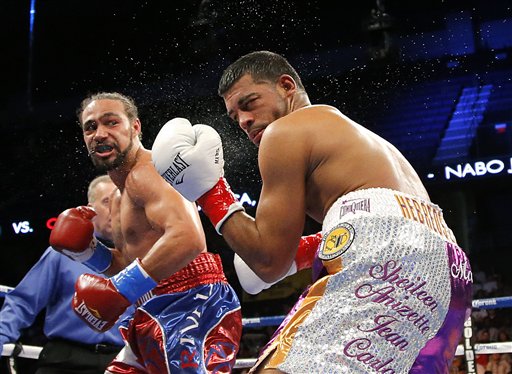 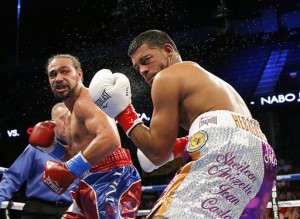 2014 has not lived up to 2013 in boxing, not by the least. Many fights falling through, mismatches, and more importantly, inactivity amongst some of the sport’s brightest talents have accounted for such mediocrity.

Enter in Keith “One Time” Thurman. He had a sensational 2013. Such a great year that many fans felt he was a fight or two away from landing a fight with the king of the sport, Floyd Mayweather Jr.

2014 has seen Thurman fight only 3 rounds against an over the hill Julio Diaz. That fight was in April. Then came an unexpected shoulder injury that has pushed Thurman’s return  this year back to November.  “What’s next is all in the works,” Thurman told ThaBoxingVoice.com. “Nothing’s guaranteed. I believe I’m going to be thrown on a November date which is really good to get me through this physical therapy on my shoulder. In camp I was holding back on my left hook, so it was good they took a look, nothing major, there was some inflammation and that’s where all the soreness was. It’s helping me release the tension on my shoulder.”

Now while most Haymon fighters seem to use the typical, “it’s all up to my handlers.” Thurman took a different approach in who he wants to get next in the ring.

“I’m looking forward to getting back in the ring and fight a great opponent. I would love to bridge the gap and fight someone on the Top Rank side. I heard Oscar is supposed to have a sit down with Bob and hopefully they mention who do you have for Keith Thurman, maybe it could be Provodnikov. I want to create one of those great fights for the fans to end the year.”

One fight that may have fell by the wayside was a highly anticipated matchup between Thurman and Shawn Porter when Porter lost his last fight with Kell Brook. It all comes with the territory says Thurman.

“I was disappointed in seeing him (Porter) lose as a friend, not a competitor,” explained Thurman. “He didn’t show the world his boxing ability. I feel he’s been running through guys and he ran into an obstacle and Kell Brook wasn’t easy to maul over. Brook didn’t simply just sit down. One judge had it a draw, I expected that. I told people it could have been a possible draw across the board. The judges were impressed with Brook’s defense and accuracy and that’s what helped him win.”

Thurman says the fight is still a possibility but it won’t be a big as it could have been.

“Me vs. Shawn  Porter, it was being talked about like it was the 1st super omega fight of the next generation, the young kids that were coming up and beating everybody,” stated Thurman. “Me and Porter was going to be that. It was going to be a superstar event. It’s an event that can no longer happen.  At least it won’t be the magnitude that it was portrayed as because Shawn Porter brings action, it will still be a tremendous fight. “

Thurman still has a goal in mind, and that goal is to give losses to the last two undefeated fighters in the division.

“I got my eyes a little geared towards Kell now. I want to get rid of the undefeated fighters in the welterweight division. We got rid of one unexpectedly. Now in  the top 10 we are left with Kell Brook, Floyd Mayweather and Keith Thurman. Knowing that I’m one of them just makes me pumped and psyched. Floyd’s got a fight coming up and I’m sure Maidana’s going to glove up and give Floyd a run for his money. There was disappointment in Porter losing but we’ll see, the big fights are coming.”