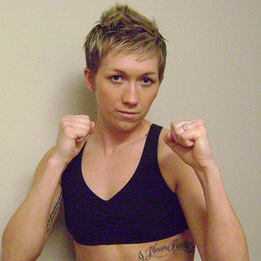 Phoenix Arizona resident and MMA contender Jillian Lybarger is set to make her professional boxing debut tomorrow 9/4/2014, at the Crowne Plaza Hotel in beautiful San Diego, California. Her opponent Haley Pasion is also making her boxing debut, it will be interesting to see who comes out on top in this battle of debuting fighters.
Jillian took some time to do an exclusive interview with Tha Boxing Voice here is what she had to say in terms of the transition from MMA to boxing. Her first professional boxing match and her relationship with her twin sister, who is also scheduled to fight soon on an MMA card.

TBV: Why the switch from MMA to boxing?

JL: I had trained for nine weeks in preparation for an MMA fight, which ended up not happening. After spending all that money, the boxing match was brought to my attention over social media.

TBV: Do you think that you might be coming in at a disadvantage, because of the switch to boxing from MMA?

JL: I think so, but at the end of the day, it is a fight and that’s how I am looking at it. I am trying to look at it in a positive way.

TBV: How have your fans reacted to your switch from MMA to Boxing? I ask because there is always a rivalry between the two sports.

JL:  It has been nothing but a  positive reaction from the fans, even when the fight posters went up every one was very supportive.

TBV: What are the biggest differences between training for MMA and boxing for you?

JL: It is a very different practice wise. I had three coaches in preparation for an MMA bout. In boxing I only have two coaches, a boxing trainer and strength conditioning coach. It is also lot of shoulder work, throwing lots of punches, arms feeling fatigue and then throwing 100 more punches, in and out just a lot more active.

TBV: What was your biggest challenge in terms of the transition from MMA to boxing?

JL: Not crouching down, that was my biggest transition. When I throw my combos, I want to go down. There are no take downs and that is my biggest challenge.

TBV: What does your sister think about your transition from MMA to boxing?

JL:  She has been very supportive, we have been training together we have a training session together tonight she is in a fight camp for an MMA fight herself.

TBV: How would you describe your style?

JL:  I take a pride in my cardio. I don’t stop I am always coming forward. I am super aggressive and I stay in the center of the ring and dictate the pace of my opponent.