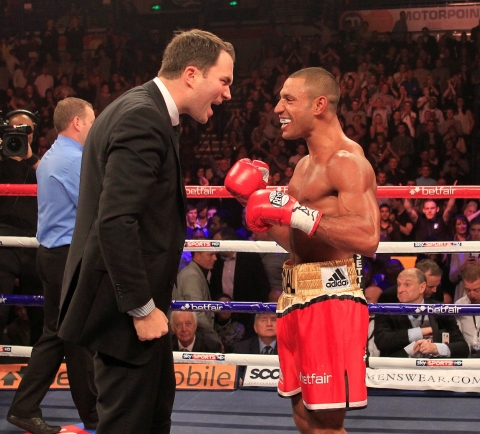 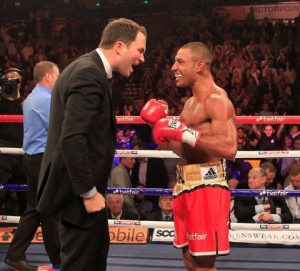 The first slices chopped off of Porter after the first bell, were a telling statement of the intent Brook had brought over with him from across the pond. Immediately within the first round, the entire game plan of Porter was laid bare. Explosive rushes, with little coordination. Several times Porter is clocked as the seconds tick away in the first, Brook ends the round with a nasty right cross. Kell Brook is in the fight, already.

Kell Brook, in a lot of American fans eyes is a literal unknown quantity, a “solid test” for porter, a mere walking battering board Porter can utilize, to eventually fathom the answers to questions he has regarding himself, skills and areas of improvement. It didn’t work out like that though.

The skin above Brook’s eye is separated, a gash exposing deep red meat. This is in the 2nd and it’s with thanks to a subtle but in the words of Al Bernstein “intentional” Porter head butt. Tasmanian devil inspired spinning whirlwind attacks via Porter, an untidy barrage of clubbing attempts are either nullified by Brook by simply being tied up or using more advanced quicker footwork, and then of course retorted with a cutting right hand, interspersed with some follow up repeat rights.

These early rounds are close, mostly a repeat of Porter falling forward, firing one hundred bullets from the barrel in an attempt to hit the can once. The 3rd and 4th could be given to Porter who put in some concentrated effort on Brook’s ribs, maintained a bobbing, intimidating pressure and silenced the lead right hands and stiff shots from Brook.

In the 5th, Brook’s countering with crisp left hooks and placing hands upon Porters face with a consistency that team Porter was woefully unprepared for. Kell isn’t running away with the fight, but he is winning it. The one constant above all to sit prominently in the memory banks of those watching, is that there’s cleaner boxing from Brook thus far. Porter almost seems to lack any actual game plan, despite this, he is having some “crash, bang, wallop”success with Brook.

In the round after we see Kell’s rock solid jab crashing several times against Porter’s head, each blow accompanied with a stinging loud snap as the leather collides with skin and bone. There is a lot of holding from Kell, a section of his game I’d expect to be analysed and diluted as time goes on, replaced with more uppercuts, counter hooks and body work, but that can be revised in the future. There was once a fight, not so long ago, where it seemed Brook didn’t know how to hold…Carson Jones, so in this sense, there’s an improvement. Kell acquires additional weapons, with each fight.

By the 7th Porter is landing his work a little cleaner, thus extending a more definitive line and contrast between his earlier leaping attacks and slightly more visually distinctive body shots upon Brook. Brook catches the attention of the crowd with a well placed uppercut, then ends the round with a superb three punch combination.

In the 9th we see a dangerously precise counter combination from Brook, punctuated with a straight right hand. Porter lands as always his best work inside, in between the mostly ineffective aggression he is attempting to force the issue with.

Shawn’s features are morphing into a bleeding horror mask, as Brook continues his effective inside countering in round 10. Porter is throwing punches, they are just punches that are whizzing past targets, or swings that are grazing Brook’s defense. Also each Gung-ho attack looks more cumbersome as time closes in on the champion. Often from Porter it seems there’s no answers, no questions, no fore thought, and no game plan. There’s little clean work from either man in this 10th, but the very subtle steps, counter short left hooks and hand speed of Brook again, edges it.

A lazer guided right cross from Brook in the 11th whips against Porters head, probably my favourite Brook attack of the night. Porter bangs the drum inside with more effective results, a target Porter should have almost exclusively focused on earlier, as opposed to continually winging for the lottery knock out.

In the 12th neither man really establishes an exclamation, a one two combination from Brook, counters Porter dashing out the gates. Neither man has the crowd winning final stamp of authority that their minds assumed the exhausted and battered chassis they’re fighting with, could produce.

Porter throughout I have to note, expertly ducked under some of Brooks work very well. Brook was also clinching perhaps more than he should. In turn Porter was leading with his head, perhaps purposely in the early moments, and was also rabbit punching. It was a fight, a brawl in small spots, neither man could complain.

The wide punches were too easy to read, and Brook would win with simply more precise counter shots and effective straight punches. I humbly predicted the pattern of proceedings that would unfold in this tussle, in two online videos and also in an article at this very site. Porter has always been a little too open for me, a spoiler type with an aggressive tendency which over shadows any patient boxing and pacing he could benefit from adding to his stock.

116-112 to Brook on my card, and Kell Brook, after telling us for so very long he would be, holds aloft the IBF Welterweight Championship. The story, the moment has been visualized and dreamed of for so long, now it is here with us, solidified in the present, Kell Brook, world champion, it hardly seems real.

The first British boxer to take the world title on US soil against an unbeaten American world champion since Lloyd Honeyghan defeated undisputed welterweight champ Donald Curry in 1986.

Congratulations Kell. Go get the world.