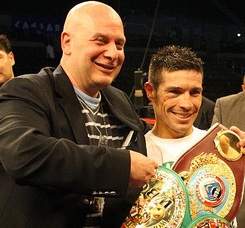 Having heart, in the proverbial sense of the word, is a nearly-universal pre-requisite for reaching the pinnacle in the sport of boxing. While some pugilists have fought their way to a title without anyone testing their will to win (heavyweight powerhouse Deontay Wilder will surely be on this list if he breezes through Bermane Stiverne as some expect him to do), one sure-fire way to earn the respect of your critics is by fighting through pain and adversity regardless of whether you are declared the winner after the final bell. Remember Provodnikov-Bradley?

Considering the above, and reflecting back on the last half decade in the sport, most would agree that very few fighters from this generation exemplify “having heart” any more than Sergio “Maravilla” Martinez.

As athletically gifted as he is, he has also shown us, time and time again, that a true champion needs more than physical ability to reach the summit, and then prevent anyone from knocking him off of his perch. Whether we like it or not, however, the body tags along for the ride that the heart takes it on, regardless of how crazy, taxing, or potentially debilitating the journey ends up being. Selfishly, the heart may want to continue fighting, despite the fact that they body is pleading to call it quits.

Was Martinez’s most recent performance at Madison Square Garden, in which he suffered a tremendous beating at the hands of Miguel Cotto, his last ride? He has claimed that he wants to continue but has also acknowledged that first consulting with experts regarding the fitness of his body (not his heart and will, there are no doctors for that) is probably best.

Lou DiBella, Martinez’s long-time promoter, is usually sharp, confident, and eager during discussions about his fighters. When asked whether or not he agreed with his star fighter’s decision to fight on, that fire and confidence that we expect from DiBella seemed absent.”He’s a man and he’s had a great career and he’s as together and intelligent a person as I’ve ever worked with.”

His words and body language implied that we shouldn’t get ahead of ourselves.”He hasn’t announced any date, any opponent. Nothing yet. He’s going to the Mayweather-Maidana fight to root for his countryman. He’s then coming to NY and has a series of doctor’s appointments scheduled and he’s going to meet with some specialists. Then he’s going to make up his mind.”

Martinez seemed slow and sluggish opposite a sharp Miguel Cotto last June but he asserts that a fierce shot to the head in the first round, not his knees, was the reason for this performance. If it wasn’t the knee, though, why is he getting it checked next month. “He has had knee problems in the past. He’s had issues and he believes that the shot to the head is what created the problems, but we want to make sure that everyone is assured that he’s ok to get in the ring and fight.”

The annals of boxing are brimming with boxers that kept fighting long after their bodies were no longer able to compete on the elite level. Martinez may have already crossed that threshold but, for as much as many of us would like him to bow out gracefully, his heart will be the one in charge and underwriting his decision next month.