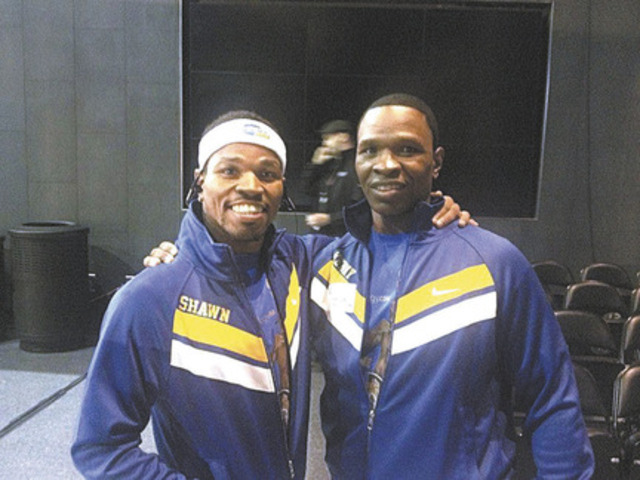 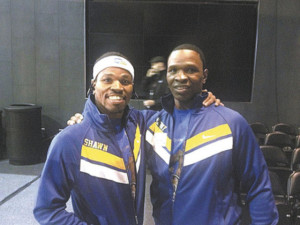 Exactly 10 days ago, Kell Brook dethroned Shawn Porter becoming the new IBF welterweight champion of the world and 10 days later, the fight is still being talked about. Mainly because of what took place in the ring that night and information that has recently hit the surface regarding the hand wraps of the new champion.

For starters, Shawn Porter told ThaBoxingVoice on our twice a week radio show that while he was in the locker room wrapping his son’s hands, one of his seconds Mike Rodriguez relayed the message that Kell Brook had to have his hands rewrapped twice.

“What he told me through text messages; these guys are trying to use the wrong type of gauze. Initially they tried to use an elastic type hand wraps. Then he sent me another message saying ‘haha’, these guys are using way too much tape. I’m going to let them finish then show the inspector to make them take it off and later he tells me that they made him take it off,” explained Porter. “I asked if you see them put the gloves on and he said no he didn’t, but he did say he had them rewrap twice.”

Now that second part of the equation is the part of brand new information relayed to Porter that had him concerned.

“There’s information being sent to me, not something I’m investigating. Where there’s smoke there should be fire,” stated Porter. “I was sent information of Brook that when they took his gloves off after the fight and took the gauze off that there was tape on his hands near the gauze.”

According to amended rule 323 section b of the California State Athletic Commission, “Said adhesive trainer’s tape may cross the back of the hand twice but shall not extend within one inch of the knuckles when the hand is clenched to make a fist. (http://www.dca.ca.gov/csac/stats_regs/20101129_original.pdf)”

While Porter wouldn’t elaborate of the proximity of the length of the tape near the knuckles or if the tape was on the knuckles, he certainly wasn’t pleased with the information and was told in the locker room by his inspector that they may look into fining the Brook camp for the two rewraps.

“Our inspector said that he would look into fining him because of rewraps, but as far as investigating or protesting, there is no investigation as far as I know and there won’t be a protest on my end unless someone close to me decides that they want to take this any further,” stated Porter.

The reason being Porter said, “It’s part of boxing. There’s a reason why there’s no union or collective bargaining in boxing. If this is one of the things that gets slipped under the rug, I’ll just slip the punches and come back but if people say something and bring it to the light, then we pursue it and it won’t happen next time, but its boxing and things like this happen.”

But, there’s one thing that Porter did take into account and it was his opinion on Pat Russell, who he says was inconsistent .

“We had frustrations with the clinching,” said Porter. “You can’t get no pretty fight out of that situation. The ref came in before the fight and demonstrated the difference between clinching and holding, what he would accept and not accept. He said that to everyone that was back there. I told my camp we got a competent ref, let’s go to work. Then he proceeded to not even go by what he told us.”

As his corner pleaded his case on Pat Russell allowing too much clinching, Porter says Russell didn’t want to take a point that would change the fight and was wrong in doing so.

“We were yelling. ‘You got to stop the holding,’ in the middle of the fight like the 5th or 6 round. The inspector told me to tell my guy to stop yelling at the ref in the middle of the fight. We were being threatened. We all told Pat to help us out with the excessive holding. Pat tells us that he doesn’t want to take away a point that might determine the fight. You can’t tell us that something like that you commit too and then say you can’t do it because it’s going to decide the fight. At that point, I had to tell my guys to shut up because that’s what we were told. We weren’t allowed to tell his guy that he’s not doing his job right. I would have rather we both get docked points, so then that stops the holding.”

While Porter’s segment ended, he remained on the line to listen and wanted to rebutt some of the callers’ opinions. One popular one was that as a coach and a fighter that Team Porter should have adjusted.

“We tried to adjust to the holding,” Porter went onto say. “He felt he could beat the guy on the inside. I asked Shawn to box him from the outside, but he wanted to get inside and get the guy. Could I have shaken the kid up and tell him that’s not what I want? Yes, but I saw him being effective.”

When a caller claimed that while Brook may have initiated the clinching, Porter certainly did his share of rabbit punching, the trainer explained, “It’s a lot of things he could have did that were dirty to stop holding. If he was being held and he didn’t get any room to get any punches off and he gets hit in the back of the head then that’s what it was. If you consider that dirty when Shawn could have done a lot of things that are legitimately dirty like elbow or head butt, then call us dirty fighters.”

Porter is ok with the decision but his opinion is that Brook did not outbox them and from what he seen, Brook is not exciting to watch.

“One ref is going to tell this kid he’s holding too much. We’re not disputing the decision. Holding isn’t allowed but clinching is yes. We move forward and we’ll make our adjustment. Are you going to pay to watch someone that holds when he fights? If you in the clinch and the referee says break and the guy is still holding and pulling, then that’s holding. We got beat because we got held all night and that’s how he won the fight, that’s fine, but if you want to tell me we got out boxed or outpunched then you’re wrong. If the ref isn’t going to do his job, all we could do is try and fight through it.”

So what next for Shawn? According to Ken; a long break.

“He won’t be back this year. He’s been rocking and rolling non-stop for two years. Due to him putting that kind of work in, keeping his work and fight week, being disciplined and doing all the training that he does. It’s time for him to relax a little bit,” stated Porter. “I want him to exercise his mind, take some online classes before he gets back into the ring. He should be back January and February, I can say that.”

As far as the level of opposition, they want nothing but the best.

“Keith Thurman, Tim Bradley, we want those fights. We want to be great.”