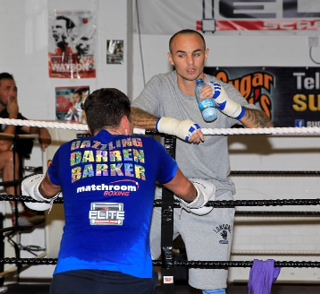 Kevin Mitchell says he wants to challenge Derry Mathews for the Commonwealth title as he prepares for action at The O2 on Saturday night (October 5), live on Sky Sports.

Mitchell faces Marco Lopez for the vacant IBF Inter-Continental title on the bumper bill in Greenwich, and the former World title challenger hopes that victory will lead to a clash with the Liverpool man later in the year.

“A little dust up with somebody like Derry Mathews would show where I am at,” said Mitchell. “Ricky Burns is out of the picture at the minute and probably will be for a little while but give me Derry before Christmas and that will put me in good stead for a World title fight in the New Year. I am very confident. I am training very hard so I am up for anything.

“I have had 12 months out so I am not fighting world number ones like I have in the past with Breidis Prescott; I am basically being put in warm up fights. This Mexican kid will test me and push a few boundaries but I should be dealing with these kids if I am world class. After that I should be looking at the likes of Derry or somebody like that, getting in with him and going on from there to prove my class.

“I saw clips of Mathews vs. Curtis Woodhouse. Derry has always been the same, he has always been a good fighter and in good nick. He has got himself in to a good place and he is training well, training hard and he is doing well for himself. But he doesn’t bother me, no fighter bothers me. Once I am in the shape I am in now, what can bother you?

“I want a domestic showdown with Derry before Christmas. I want it, I think it is what Eddie wants and I think it is what Derry wants. Prove will be in the pudding that night, we will see who has the minerals and who doesn’t. Eddie has said if I produce there I will get a shot. Derry has been producing the goods, I will prove tonight that I am still producing the goods and I will go on and win a World title.

“You have Anthony Crolla, he is a good little fighter too. I won’t forget two or three years ago when I had just beaten John Murray I was at a show and I was sitting with Gavin Rees. It was before the domestic fights started happening and the talk was all about me, Burns and Murray and I said to Gavin that it is a lot stronger at domestic level even though they were talking about World titles for us all.

“I was fighting once a year and you can’t be fighting like that whereas all the British fighters were fighting regularly in big domestic dust ups against each other. I said to Gavin that the domestic scene would be hot soon and it is now, it is flying.”

Mitchell’s meeting with Lopez is part of a star-studded line-up with Anthony Joshua MBE making his professional debut and Scott Quigg taking on Yoandris Salinas for the WBA Super Bantamweight title.