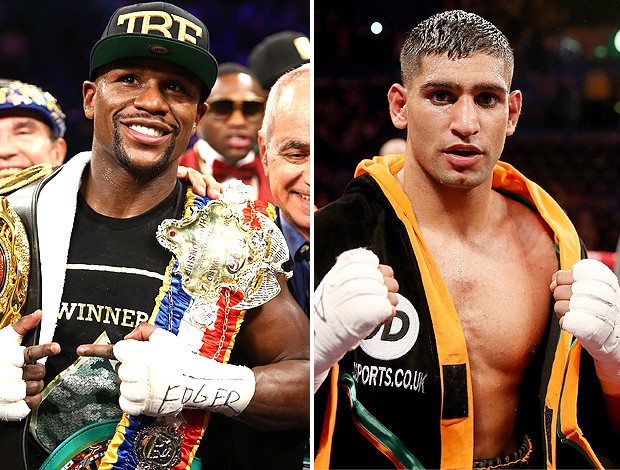 Following his unanimous decision victory over Chris Algieri on Saturday evening, Briton’s Amir Khan may or may not land his dream fight against Floyd Mayweather Jr.

Khan had to dig deep – perhaps too much to prove his viability as a potential Mayweather opponent in September – but none the less, Khan proved he can make adjustments to turn the fight in his favor.

Chris Algieri hired John David Jackson, the trainer of light-heavyweight titlist Sergey Kovalev in late March, but the native New Yorker fought like he and Jackson had been partnered for much longer than two months.

Algieri was a completely different animal compared to the one we saw get dropped by Manny Pacquiao six times en route to a lopsided unanimous decision defeat in Macau last November. He came to fight and made the WBC Silver champion work daringly for the victory.

Khan, who is known for having a questionable chin, was hurt several times in the early rounds, which caused his horde of fans to bite their nails just a little harder.

Algieri hasn’t shown much power in his career, but he showed a little more than what we’re used to seeing. And although he is clearly not a knockout artist of any sort, and never will be, he and trainer John David Jackson emphasized timing in training, and he was doing a hell of a good job early.

Styles make fights, and Khan knew after the first-half that walking through the 5 ft. 10 Algieri, was not feasible. As a result, he had to do what Keith Thurman did to defeat Leonard Bundu, move and punch.

Every boxer has flaws, and Algieri is notoriously a sucker for the uppercut on the inside. Manny Pacquiao made him pay dearly, and Khan was able to land that shot from time to time.

Also, Khan’s hand speed and combinations left Algieri with a reconfigured face again, but not as grotesque as the damage he sustained against former 140 lb. titlist Ruslan Provodnikov.

Algieri must continue to work with Jackson to improve on defense. Otherwise, his career will be in jeopardy in the long run.

If Amir Khan fought Devon Alexander on Premier Boxing Champions, that would have been a different story because on free television, the fans would have gone ‘Oooh! Ahh,’ but that wasn’t the cast tonight.

Khan may not get a shot at Mayweather simply because he didn’t give Algieri the same beating he received against Pacquiao last November.

Yes, I get it, Algieri was not the same fighter. But keep in mind, Khan was Pacquiao’s sparring partner at one point, and both were under the tutelage of Freddie Roach.

Both Khan and Pacquiao have very similar flaws, but Pacquiao has been good enough offensively that some of the flaws that we have seen in recent fights weren’t an issue.

Khan was tentative for far too long against Algieri and would essentially be dog meat against Mayweather if he employed the same tactics.

Perhaps Khan was thinking too much about what lied ahead and didn’t prepare properly for Algieri, something that trainer Virgil Hunter was afraid about earlier in the week.

Khan also admitted after the fight that he expected Algieri to fight off his back foot, and it caught him off guard.

“Obviously, I didn’t think Algieri would come forward,” Khan said. “I figured he would be on the back foot. Virgil gave me a game plan, and it worked for me.”

Ultimately, Floyd Mayweather will oversee his options and choose who he faces in his final fight. It is possible that the former five-time division world champion will fight Khan just for the money the fight will accumulate across the United States and England.

The potential clash won’t come anything close to Mayweather-Pacquiao’s record-setting numbers, but it would be a solid payday for Mayweather and a career payday for Khan.