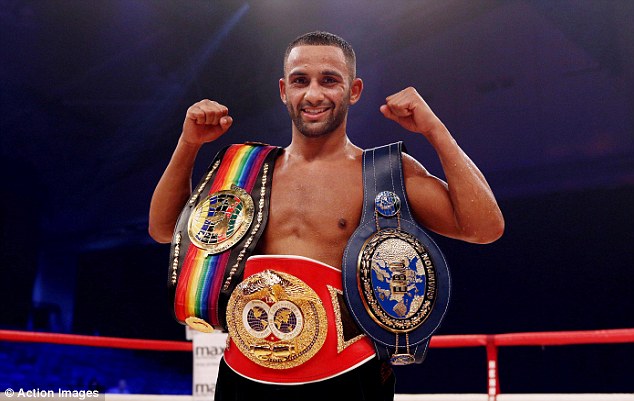 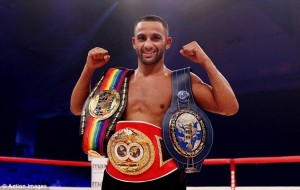 European and Commonwealth super-bantamweight champion Kid Galahad(18-0, 9KO’s) sat down with James Helder from iFL TV over the past week to discuss the current state of his division. The top tier of which he feels very close to breaking into.

Kid -birth name Abdul Barry Awad- hails from the UK by way of Qatar, right in the vicinity of two super bantamweight titleholders in Scott Quigg(WBA) and Carl Frampton(IBF). Both champions have been circling each other since before they were crowned, and now that they both sit at the top of the division a unification bout looks inevitable. Kid sees it as the most significant fight to be had.

“I think Frampton will stop him between six and eight.”

“Hopefully I can fight the winner or loser of that.”

With no world belt from any of the four sanctioning bodies, a tricky, elusive style and lack of global name recognition, Kid isn’t giving either man much reason to take a high risk-low reward fight against him. But, once he has a known name on his resume the levies should open and more big fights are sure to become available. Unless he looks positively destructive.

Despite his lack of top-flight experience Kid rates himself above both Frampton and Quigg, but still pays homage to the Dark Lord of the division.

“I think I’m the second best super bantamweight in the world after [Guillermo] Rigondeaux.”

He then related how the WBA Super and Ring Magazine champion has managed to separate himself from the pack.

There is an air of mysticism in how a technically adept fighter like the Kid fails to specifically identify how Rigondeaux mentally disseminates his opponents. He so comprehensively outboxed them it seems they begin to question their own worth, especially so in Donaire’s case who has looked a shell of his destructive self since his points loss to Rigondeaux two years ago. No wonder the Cuban commands such reverence from his contemporaries.

Kid finished his round up of the 122 .lb. class with a slight against the only belt holder not yet mentioned, WBC champ Leo Santa Cruz, a man who has flirted with Frampton and Quigg for fights over the past year, though nothing materialised.

Cruz’s resume is noticeably bereft of any real name value, which wouldn’t be such an issue if he didn’t look so stagnant as of late. The intensity that marked his IBF championship reign through 2012 seems to have subsided somewhat, leading to call-outs from up-and-comers like Kid who see him as the weakest pillar of the division.

With all that done Kid gave his thoughts on the biggest event born from boxing in almost thirty years; Floyd Mayweather(47-0, 26KO’s) vs Manny Pacquiao(57-5-2, 38KO’s) set for May 2nd in Las Vegas, the meeting of two mega-powers for three of the welterweight titles. All the marbles.

Mayweather will enter the arena with an immaculate record and a seemingly impenetrable defence against the flaring, yet flawed, fire of the Filipino sensation. Many observers side with the American going in to this for reasons both technical and tribal that are too numerous to recount here, and Kid is leaning that way also.

“If anyone’s gonna beat Mayweather it’s Pacquiao. I can’t wait but in my personal opinion, I think ‘Money’ May is gonna steal the fight off Pacquiao.”

‘Steal the fight.’ By using an apparently innocuous phrase like this, the Kid has touched upon the only criticism anyone can have against Mayweather in the ring; he competes to win. He has never been willing to go to war, instead relying on his substantial physical gifts and comprehension of the sweet science to box his way to victory. By doing so he has simultaneously ensured his own success and bored some of the more bloodthirsty fans who wish to see violent exchanges, yet nobody can argue with the success this approach has brought him.

The Kid himself has not the bellicose nature of a scrapper, choosing rather to employ the slippery if risky defensive style of his Wincobank predecessors Herol Graham and ‘Prince’ Naseem Hamed. He is on the same path towards success as both of those men, but whether he falls short of the mark by leaving his chin out there like Graham or takes off like the supernova that was the 90’s Prince, we shall have to see.