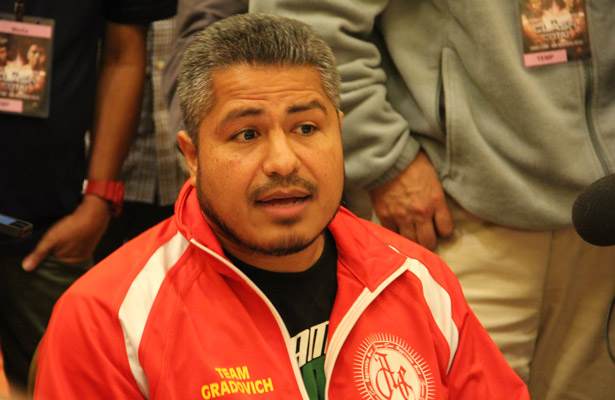 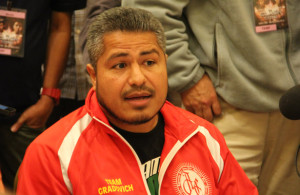 California boxing trainer Robert Garcia was directing proceedings in the gym when he spoke to Elie Seckbach for Esnewsreporting.com, and the conversation inevitably turned towards the men who will finally collide on May 2nd for the WBA Super, WBC and WBO welterweight World titles. Floyd Mayweather(47-0 26KO’s) and Manny Pacquiao(57-5-2, 38KO’s).

Seckbach did not ask Garcia for a technical breakdown of the fight or to pick a winner. Instead opting to probe the former IBF World super-featherweight champion on who he would rather face in the ring given the choice, ‘Money’ May or the ‘Pacman’.

Anyone can search Youtube and relive some of Robert Garcia’s finest moments in the ring, and ironically enough one of his most impressive performances came during a defeat. In June of 2000 Garcia took on the rugged Ghanian Ben Tackie in Las Vegas. He was coming off his first pro loss to Diego Corrales eight months earlier in which he lost his title via seventh round TKO.

Regardless, he put on an absolute clinic for nine and half rounds, soundly outboxing Tackie and looking good doing it until he was flattened midway through the tenth by a brutal left hook. Referee Richard Steele felt the contest should be stopped with thirty seconds left in the round and Garcia on his feet.

I can only try and stretch my imagination to have any idea what that felt like, it must have been brutal. Perhaps those stoppage losses at the tail end of his career prompted Robert Garcia to qualify his pick.

While I am in complete agreement with Robert Garcia here, this last statement could do with some clarification. If you look at Pacquiao’s record, you see he hasn’t stopped anyone in over five years. The last opponent of his who didn’t hear the final bell during the course of defeat was Miguel Cotto, and he finished on his feet with his face a disfigured bloody mask. Everyone else he faced at the weight; Juan Manuel Marquez(in their third meeting) Antonio Margarito, Shane Mosley, Brandon Rios, Tim Bradley, Joshua Clottey, Chris Algieri all went the distance.

This is not to say Pacquiao doesn’t have real power, just once he moved up past light-welterweight his knockouts dried up against larger opposition. His speed and punch output more than makeup for any shortcomings in the power department though. As previously stated he beat up Cotto, smashed Margarito’s eye socket to pieces, retiring him in the process, and dropped Mosley. This guy has heavy hands.

Mayweather, on the other hand, is renowned for his accuracy, speed and timing rather than the force of his punches. All three characteristics combine with his physical strength to create an as of yet unbeatable package. Many observers venture to say his fragile hands -which have splintered beneath his flesh on several occasions- prevent him from really sitting down on his punches to force the stoppage in his bouts. It is probably the one missing ingredient that would make him the perfect fighter.

It has no bearing on who he thinks will win on May 2nd but when all is taken into account, you can see why Garcia would rather face Mayweather in his hypothetical match-up.