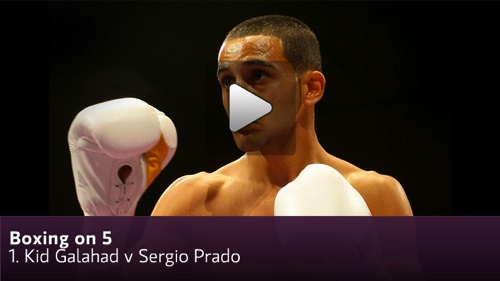 London (11 April) Kid Galahad will fight back in front of a packed home crowd at Ponds Forge Arena, Sheffield, on May 10th, live on Channel 5.

“I loved my last fight and it really meant everything to me to win the European title in front of all my friends and family, as well as having my team and Brendan (Ingle) there,” Galahad said.

“I just need to keep winning, keep progressing and building my momentum towards a world title.”

The 24-year-old Qatar born Sheffield fighter extended his unblemished record to 16 wins, with a 12 round masterclass over former Spanish champion Sergio Prado just over two weeks ago.

The Ingle trained star, Galahad, who is also a former undefeated British and WBC International champion, impressed the home crowd with a confident showcase of his slick movement and blurring hand speed and is excited by the super bantamweight division and ready to make it another memorable night for all his Yorkshire fans.

“I watched Carl Frampton fight last weekend in his WBC world title eliminator and he is doing great and looked fantastic, obviously Scott Quigg fights next weekend defending his WBA world title in Manchester and I’m the new European champion and fighting again on May 10th.

“If we all keep winning and keep doing well the super bantamweight division will really heat up and could become the new generation of Eubank vs Benn vs Watson.

“The fans can expect me to give it everything I have to win, every time I fight and I promise I’m going to do what I do best and that’s win.”

Promoter Mick Hennessy said: “I am delighted to bring Barry (Kid Galahad) back to his home city so quickly.

“His last performance was superb to pick up the European title and I know all his fans are in for a real explosive show on May 10.
“We will be announcing more details over the next few days and one thing is for sure, this isn’t to be missed.”

Also scheduled to fight on the show is undefeated heavyweight sensation Hughie Lewis Fury as he looks to extend his perfect professional record to 14 straight wins. There will also be a whole host of local talent on the bill, including Sheffield’s Dave Howe, Callum Hancock, Tom Mcassey and Ryan Hardy, Barnsley’s Lee Noble, Rotherham’s Karl Bell and Chatteris fighter Jordan Gill.