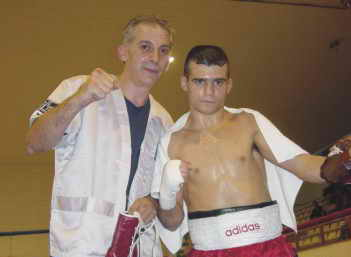 Kiko Martinez has vowed to pour the pressure on Carl Frampton when the pair meet on February 9 in Betfair’s ‘Unfinished Business’, and the Spaniard says he will KO the Belfast star live on Sky Sports.

Martinez defends his European super bantamweight title against The Jackal on a great night of action that the Belfast fight fans have snapped up tickets for – but the 26 year old visitor is relishing his role as party pooper and wants to derail Frampton’s rise to the stop.

“I feel I will win by knockout, or they’ll stop the fight cause of the beating I’m going to put on him, that’s how I see it in my mind,” said Martínez. “I don’t worry about the judges. This is a great country for boxing, it’s a serious title up for grabs and it’s not Germany or France. They know about boxing here and the judges will be fair.

“I think Frampton will try to run, I think he’ll box and he won’t go toe-to-toe. I know I’m a lot stronger than him. When I’m in the ring with him, he won’t want to fight with me. He knows it, his corner knows it and all of Ireland knows it.”

Ticket sales are flying for Frampton’s 16th professional fight and the third topping the bill in Belfast’s premier venue. The unbeaten Belfast boy demolished former World champion Steve Molitor inside six rounds in September to signal his arrival on the World scene – but Martinez says that performance is overrated and he will not be deterred fighting overseas having boxed in Belfast in July and three times in Dublin, including his famous first round KO of Bernard Dunne.

“I think Molitor didn´t have a lot of time to prepare for that fight, and he didn´t really want to fight anymore,” said Martínez. “It was easy for Frampton and Molitor wasn´t the fighter that he was in the past. Belfast fans know their boxing, they´re not stupid and they would be of the same opinion as me.

“I´m glad to be fighting in Belfast, people will recognise me more over there for the champion that I am, and they like my style. They know me well and boxing is big there, much bigger than in Spain.  This fight is taking place where it really should be, in Ireland.  This is going to be a big fight for all of Europe.”

Martinez and Frampton clash on a massive night of boxing in Belfast, with Martin Lindsay challenging Lee Selby for the British and Commonwealth super featherweight titles and Andy Lee facing Dublin’s Anthony Fitzgerald in a ten-round middleweight clash on a top class undercard.

Tickets for Betfair’s ‘Unfinished Business’ featuring Carl Frampton vs. Kiko Martinez at the Odyssey Arena on Saturday February 9 are on sale now. Floor and tiered seats are on sale from the Odyssey Arena website www.odysseyarena.com priced £30, £40 and £60, while Ringside tickets at £100 and Inner-Ringside VIP tickets at £150 are both available from Matchroom Boxing’s website www.matchroomboxing.com.