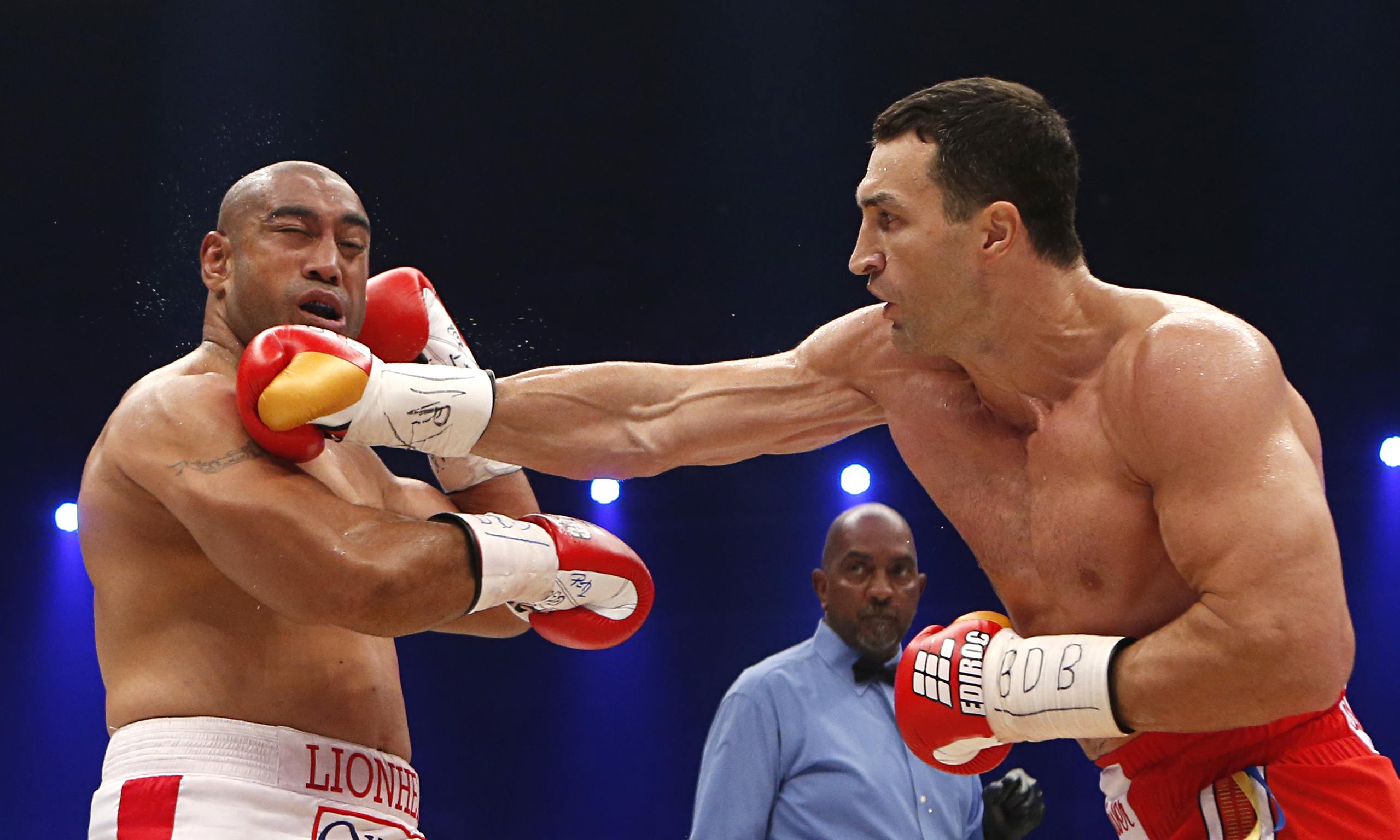 Heavyweight king Wladimir Klitschko effortlessly dominated yet another contender as he continues his journey to break Joe Louis’ record.

The 38 year old Ukrainian is said to be aiming to be world champion for at least another 4 years in order to break Joe Louis’ record of 12 consecutive years as heavyweight world champion.

Klitschko went one step closer to this aim with a comprehensive victory over the unfancied Australian based Samoan Alex Leapai via a 5th round knock-out.

Klitschko came into the fight as the main man in the heavyweight division with a highly impressive record of 61 wins and 3 losses. He hasn’t lost a fight since 2004 and has gone on to dominate the division in the past decade with his safety first style.

Klitschko standing at 6ft 6 is normally taller than his opponent and uses his stiff jab to keep the fight at range and easily win fights. Klitschko’s jab is tough and not only does it keep opponents away from him but it also inflicts damage and sets him up for the right-hand.

Klitschko possesses very good punch power with the presence of 52 knock-outs on his record now and is able to end fights pretty much whenever he wants. The problem for many is that he doesn’t decide to go out there and end fights early.

He looks to establish the jab and break down his competitor before ramming home the right hand and finishing off the fight. He isn’t the most exciting fighter in the world and because of that he has more than his fair share of critics.

The problem is that most of the men who enter the ring with him simply aren’t good enough to even test him. He is several leagues above most of the fighters he goes in with and dispatches them with relative ease.

It is difficult to remember a time in recent years when he has been troubled and that is testament to the dedication that he gives to the noble art and his defensive mentality but also due to the level of opponents he has faced.

This fight was to prove yet another easy victory for Dr Steelhammer in the Koenig Pilsener Arena, Oberhausen, Germany. Leapai aged 34 standing at 6ft was at a major disadvantage both physically and technically in this fight.

Klitschko towered above the former truck driver and as always established his jab with unerring accuracy. He popped the jab out continuously and seemed as though he couldn’t miss. He kept Leapai at distance and whenever his opponent did get close he grabbed hold.

Klitschko floored his man in the first round and twice in the fifth as he looked to up the tempo. Leapai’s lack of head movement meant that the champion was able to land his big shots easily and ended the fight with his big right.

Once again Wladimir Klitschko has out-classed a man who didn’t really deserve to fight for the world title.

No matter what people say about Klitschko it has to be said that he is absolutely clinical and amazing at what he does. He may well be safety first and not as exciting as we all wish but he demolishes opponents. His jab is incredible and he can win fights whenever he wants. When he chooses to up the tempo and finish a fighter off he is clinical. He has very good punch power and is a very savvy boxer.

Boxing will realise how good he is when he is not boxing anymore. For many though he will not be missed as too often his fights aren’t entertaining and he fights people who everyone knows he is going to beat.

Part of the blame for his criticism is his own fault due to his style and choice of opponents but to a large extent he can only fight who is out there. For years now the heavyweight division has been in a poor state of stagnation and Wladimir has taken on whoever is out there and beaten them.

It could be said that he has been denied the status of boxers such as Ali, Fraxier, Tyson, Lewis, Holmes and many others because of the lack of competition during his reign. There has not been another great fighter (barring his brother Vitali) for a while now so he has been unchallenged at the top of the division.

This situation seems to be one which is slowly but surely changing with the division seemingly starting to pick up with some good challengers out there. The likes of the unbeaten Tyson Fury, Deontay Wilder, Kubrat Pulev and others are all fighters on the rise.

What we the boxing fans want to see is Klitschko take on these boxers as they are going to be much more of a challenge for him than the likes of Leapai.

I personally don’t believe that anyone out there is capable of beating Wladimir Klitschko at the moment but to a certain extent that doesn’t matter. We just want some excitement back in what is supposed to be the glamour division of our sport.

Wladimir is no doubt an amazing champion who has achieved so much in his career but for his own legacy and satisfaction if he is to continue boxing he has to take on the likes of Fury, Chisora, Pulev and Wilder.

Klitschko is extremely likely to retire as champion if he doesn’t carry on too long as he is a class act but one man who could prove to be to the answer to the Klitschko problem is Anthony Joshua. Joshua looks to be the real deal and if he continues on with his development as expected than he could be the man to dethrone Wladimir Klitschko in a few years time.

Wladimir Klitschko dominated another ineffective contender as he continues on as the king of the heavyweight division but the criticism will continue.p