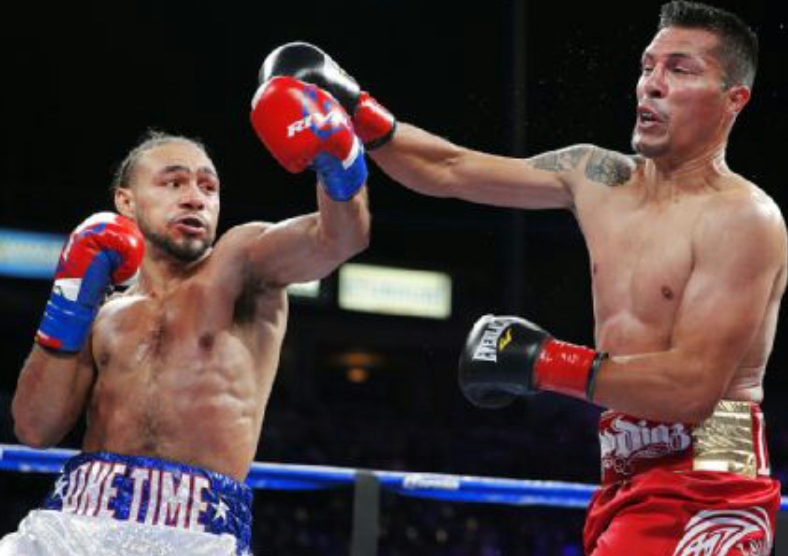 On Saturday night Keith Thurman and Julio Diaz went to battle for Thurman’s interim title in a short bout but the highlights of the night went to Lucas Matthysse and John Molina Jr. who had a FOTY candidate battle for eleven hard rounds and a questionable scorecard in favor of Omar Figueroa over Jerry Belmonte.

In the main event Keith Thurman and Julio Diaz started off slow but Thruman’s speed showed. Diaz went down in the second round and then retired in his corner after the third during a rib injury.

The co-main event between Lucas Matthysse and John Molina Jr. proved to steal the show and was an all action bout. In the opening bout Molina was able to stun Matthysse and then sent him down in the second. A cut on the outside of Matthyse’s left eyebrow opened up after an accidental head-butt. Matthysse began to get into his grove in the fourth round but went down in the fifth round from a shot that landed behind the head. Molina was able to stagger Matthysse in the sixth round with a hard left hook. In round number eight Molina tasted the canvas from what appeared to be a push but ended up going down from big shots in round ten and went down again and out in round eleven giving Matthysse (who was ahead on the scorecards) the victory.

Omar Figueroa and Jerry Belmontes faced each other as amateurs with Belmontes winning their bouts and even knocking out Figueroa. Figueroa gained revenge on his rival tonight winning a majority decision with a questionable scorecard in what was a close fight where it seemed like both fighters held out when it came to giving action for the fans. Both fighters started their twelve round fight fast and were relentless on attacking each other with Belmontes getting the best of Figueroa in the two opening rounds. In the second round Figueroa was pinned against the rose and Belmontes connected with a solid eye popping right. Figueroa began to come back in the third round landing combinations on Belmonte. In the fourth round things began to slow down and continued that way throughout the rest of the fight. One judge had it 115-113 for Belmonte and the other two judges had the bout in favor of Figueroa with scores of 116-112 and 118-110.