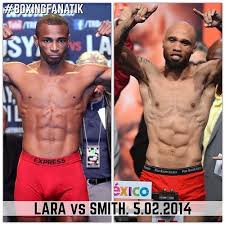 LAS VEGAS (March 25) – Las Vegas will be the center of the boxing universe Cinco de Mayo weekend and kicking it off will be an action-packed night of fights at The Joint at Hard Rock Hotel & Casino when FOX Sports 1 and FOX Deportes feature a tripleheader that includes two World Championship bouts just one night before “THE MOMENT: Floyd Mayweather vs. Marcos Maidana” takes place at MGM Grand. In the 12-round main event, the WBA Super Welterweight title is on the line when Cuban star Erislandy “The American Dream” Lara defends the belt against Las Vegas’ own former World Champion Ishe “Sugar Shay” Smith.

Plus, rising lightweight star Mickey “The Spirit” Bey Jr. will meet hard-hitting Mexican veteranAlan “Explosivo” Herrera in a 10-round matchup and in the televised opener, Argentina’sJesus Cuellar squares off with former World Champion Rico Ramos in a 12-round bout for Cuellar’s WBA Interim Featherweight World Title.

Lara vs. Smith, a 12-round bout for Lara’s WBA Super Welterweight World Title, is presented by Mayweather Promotions and Golden Boy Promotions and is sponsored by Corona and O’Reilly Auto Parts. The FOX Sports 1 and FOX Deportes broadcast airs live at 10:00 p.m. ET/7:00 p.m. PT.

Tickets, priced at $95, $65, $35 and $25, not including applicable service charges and taxes,go on sale tomorrow, Wednesday, March 26 at noon PT and will be available for purchase by visiting The Joint box office, calling 800.745.3000 or online at www.ticketmaster.com.

“Ishe Smith talks a lot on the internet, let’s see if he fights as well as he talks,” said Lara. “I’m on a different level and he’ll know that as soon as the first bell rings. He’s fighting the best super welterweight in the world and the pressure is mounting on him so he’s trying to build himself up mentally. Come May 2nd I’m going to do Mayweather a favor and retire him.”

“This is a dream come true, not only fighting for a chance at claiming another world title, but to be doing it in front of my hometown fans and family is a blessing, I’m truly honored,” said Smith. “Lara was offered a chance to fight me back in 2012 and he turned it down to fight Freddy Hernandez instead. I will show him he was right in turning the fight down the first time.  I’m ready to lay it all on the line to regain one of the super welterweight championships, come May 2nd I will turn his American Dream into an American Nightmare.”

“May 2nd should not be overlooked by any means, it’s one night with two world championships on the line,” said Leonard Ellerbe, CEO of Mayweather Promotions. “We have put together a card with a roster of top tier talent that will be showcased come fight night. I’m sure no one in the building or watching from home will be disappointed.”

“With the entire boxing world focusing on Las Vegas, we’re giving fans another stacked card the night before ‘THE MOMENT,'” said Richard Schaefer, CEO of Golden Boy Promotions. “Two championship fights and a great matchup between top prospects will get the weekend started right on FOX Sports 1 and FOX Deportes.”

A native of Guantanamo, Cuba who now fights out of his adopted home of Houston, Texas,Erislandy “The American Dream” Lara (19-1-2, 12 KOs) is one of the most talented boxers in the sport today, with his style giving fits to whoever dares to step into the ring with him. Unbeaten in five straight, with wins over Freddy Hernandez, Alfredo Angulo and Austin Trout, Lara finally got his hands on a world championship belt in 2013 and the 30-year-old is not about to let it go.

A seasoned veteran whose February 2013 win over Cornelius Bundrage for the IBF Super Welterweight World Title was the most inspirational boxing story of the year, Ishe “Sugar Shay” Smith (25-6, 11 KOs) made his fans at home and around the globe proud as he became the first Las Vegas native to win a world championship. Although he lost the belt to Carlos Molina last September, the controversial split decision prompted the WBA to put Smith back in a title fight as soon as possible and the 35-year-old vows to regain the title this May.

Cleveland native Mickey Bey Jr. (19-1-1, 10 KOs) was a top amateur before entering the professional game in 2005 and after some ups and downs, he returned to the ring in 2013 and capped off the year with a third round technical knockout win over Carlos Cardenas. Now approaching his fighting prime, he’s eager to begin his 2014 season with a big victory on May 2.

Though just 24 years old, Mazatlan, Mexico’s Alan “Explosivo” Herrera (32-5, 21 KOs) is an experienced veteran with nearly 40 professional fights to his name. A winner of six of his last seven bouts, including three first round knockouts, Herrera has the stopping power to get the respect of Bey or anyone else he faces in the ring.

Fighting out of Buenos Aires, Argentina, southpaw Jesus Cuellar (23-1, 18 KOs) was a decorated amateur with several titles on his resume, but with his style more suited to the pros, he made his debut in 2008 and hasn’t looked back since. Unbeaten in six straight, the 27-year-old won the WBA Interim Featherweight World Title last August with a 12-round unanimous decision victory over Claudio Marrero. Now he looks to make his first defense of the belt against Ramos.

Rico Ramos (23-3, 12 KOs) stunned the boxing world in 2011 when he beat the vastly more experienced Akifumi Shimoda for the WBA World Super Bantamweight World Title. While the Pico Rivera, California native lost the belt to Guillermo Rigondeaux in 2012 and navigated some rough waters after that, the 26-year-old bounced back with consecutive wins over Carlos Ivan Velasquez and Jonathan Arrellano to earn another shot at world title honors.