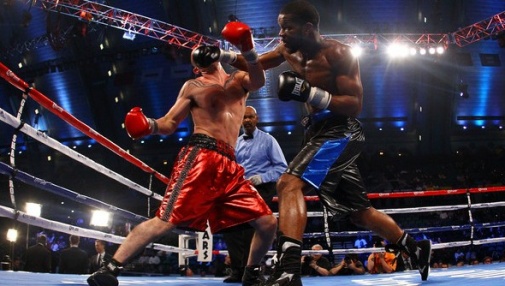 ATLANTIC CITY, NJ (June 12, 2013)—This Friday night at the South Mountain Arena in West Orange, New Jersey, undefeated Light Heavyweight prospect Lavarn “Baby Bowe” Harvell will put his perfect record on the line when he takes on battle tested Paul Vasquez in a bout scheduled for six rounds that will be one of the featured undercard bouts of ESPN’s Friday Night Fights.

The show is promoted by GH3 Promotions and Greg Cohen Promotions with the Harvell – Vasquez bout being in association with Gabe LaConte’s First Round Promotions.

Harvell, 25 years old from Atlantic City, New Jersey has a record of 12-0 with seven knockouts and is getting back in the ring for the first time since last July 7th when he knocked out Mojeed Okedara in one round in Atlantic City.

“This training camp has gone well.  My punches are strong and I have doing strength and condition”, said Harvell.

Like many in New Jersey and the Jersey Shore area, Harvell was affected by Hurricane Sandy.

“The layoff was caused because my gym (The Atlantic City PAL) being damaged by Hurricane Sandy but everything is good now and we are ready to go.”

Said Harvell’s trainer Abdur Muhammad, “Lavarn is excited to get back in the ring.  He has been looking excellent in camp and we do not know much about Vasquez but he is ready”

One man who has very high praise is longtime New Jersey fight promoter Gabe LaConte of First Round Promotions.

LaConte co-promotes Harvell and he sees a big future.

“I think Harvell is a born fighter”, said the New Jersey Boxing Hall of Famer.

“I have run across a lot of fighters such as Shannon Briggs, Charles Murray and Tracy Patterson and Lavarn is a natural born fighter.  He doesn’t beat people, he annihilates them.  He is one of those guys where you don’t get up and get your popcorn because you will probably miss an explosive knockout and we feel in the next eighteen months he will be fighting for a major title.”

Vasquez of Martinez, California has a record of 9-3-1 with 3 knockouts and has fought most of his career as a Cruiserweight.

In his last bout, he was on the wrong end of a close majority decision when he lost to former world title challenger Elvir Muriqi on March 15th in Whippany, New Jersey.

In the main event, it will be a battle for the WBA Interim Bantamweight championship as undefeated fighters Jundy Maroan takes on Juan Carlos Payano.

In the televised co-feature, Jorge Diaz squares off with Yenifel Vicente in an eight round Featherweight bout.

On fight night, doors open at 6:00 pm and the action starts at 7:30. The Richard J. Codey Arena at South Mountain is located at 560 Northfield Avenue in West Orange, New Jersey.