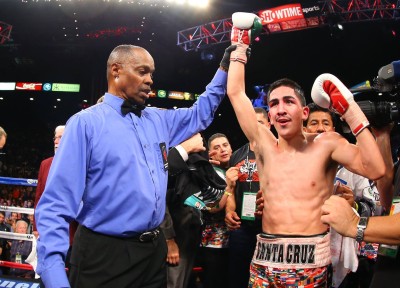 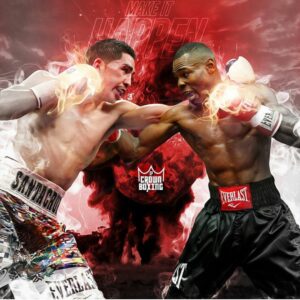 WBC super bantamweight champion Leo Santa Cruz (29-0-1, 17 knockouts) has been added to the Mayweather-Pacquiao undercard on May 2nd to be aired on both HBO and Showtime in a rare joint collaboration between the two major television networks at the MGM Grand in Las Vegas. The last time the new networks worked together was in 2002 when Lennox Lewis knocked out Mike Tyson in the eighth round to retain his heavyweight titles.

The addition of Santa Cruz to the Mayweather-Pacquiao fight could be good or it could be bad, although whatever happens in the fight won’t have an impact on the evening because the main event is obviously what millions of people around the world will be tuning in for. If Santa Cruz can get matched up with a solid opponent, that’s a fight fans would use as an appetizer to the prime rib.

If it’s another over-cooked hamburger like Jesus Ruiz and Santa Cruz struggles to swallow it until after the midway point of the fight, the fans aren’t going to stick around at the table very long. The lines for beer would be through the roof.

As early as 2014, Leo Santa Cruz called out WBA/WBO super bantamweight champion Guillermo Rigondeaux, but it’s a dangerous fight. Rigondeaux, who fights Scott Quigg next on June 20th, is the quintessence of Cuba’s stalwart, risk-based boxing approach. He’s very quick from the outside and mitigates his opponent’s offensive maneuvers with superior footwork and sharp counterpunching.

Stylistically, it could be a lose-lose situation for Leo Santa Cruz. He’s been criticized for not fighting the best in the past, and if he gets knocked out by Rigondeaux if they fight, that’s even worse.

On the other hand, Santa Cruz could cut off the ring and put Rigondeaux in an uncomfortable position on the ropes. Rigondeaux fights like Floyd Mayweather Jr., but he doesn’t quite have the chin that Floyd has. The champ was down twice in his most recent fight against Hisashi Amagasa and was knocked down by Donaire, although he won both fights. Santa Cruz has the power to make the fight a memorable one.

A more feasible matchup would have Santa Cruz squaring off against former three-division world champion Abner Mares. Mares recently defeated Arturo Reyes in an anaemic performance, but the Mexican fighter had been sick for days leading up to the fight as proven from his hoarse, cracking vice.

“I felt sick,” Mares said. “I didn’t feel like I could throw punches.
However, Mares still felt he could have fought better under the circumstances.

“I’m hard on myself because I know I can do better,” he added. “At the end of the day, it was a good night for Arturo Reyes. He’s a tough fighter.”

It’s a fight that has been talked about for years, however it’s still unknown whether Abner Mares has fully recovered from his brutal, devastating knockout loss to former champion Jhonny Gonzalez in August 2013, who was recently stopped in March by newly crowned WBC featherweight champion, Gary Russell Jr.