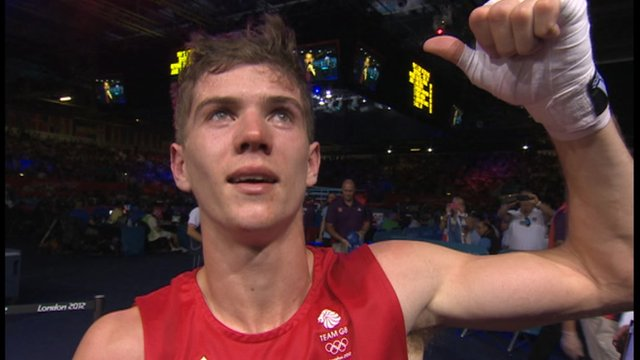 Luke Campbell MBE says his pro debut on Saturday night is just the first step on the road to becoming a World champion.

Campbell makes his pro bow against Andy Harris, live on Sky Sports HD1 from the MS3 Craven Park in Campbell’s hometown of Hull, and the Olympic Gold medallist says he was more worried about falling over on the ice on TV than facing the music in the pros for the first time.

“I’m not nervous at all, just incredibly excited,” said Campbell. “I had nerves before the Olympics and even before Dancing on Ice, but I’m not nervous about my debut, I’m just really looking forward to it. I’ve trained incredibly hard for it and I plan to put on a great show to excite the fans so they come back again.

“The best boxers in the World have to make their debuts and that was just their first step on the road to World title success – and ultimately that’s my goal.

“It’s a new leaf and I’m so excited about it. I had a good rest after the Olympics and I’ve got the buzz well and truly back for boxing, fresh mind and a fresh body with new goals to reach. Eddie’s the man and as far as the rest of the year and the future, I’ll look after myself in training and I know he’ll pick the right path for me. I would like to be really busy and box as much as possible as that’s where you learn the quickest in the pros. I was always busy in the amateurs and it suited me, so that’s what I want in the pros.

“I know Andy will come to Hull looking to spoil the party and I’ve heard from Thomas Stalker and Martin J. Ward that he’s a tough lad, so it will be a good test on my first night in the pros.”

The 24 year old has certainly enjoyed the best and most varied sparring possible for his introduction to the paid ranks, with a trip to New York’s famous Gleason’s Gym and then a week in Essex at Tony Sims’ gym with the likes of Kevin Mitchell, Martin J. Ward and Ryan Taylor.

“New York was brilliant,” said Campbell. “You’ve got to take yourself out of your comfort-zone and it’s a pretty hostile environment over there, you’ve got 20 or 30 Americans screaming at you, baying for blood when you are sparring one of their boys, so it was a great experience, and important to get rounds in with some experienced pros.

“Kevin Mitchell is a great guy as well as a great fighter, and Ryan Taylor was getting ready for Prizefighter and he’s a tough, hard-hitting light welterweight so Essex was as good a learning curve as New York.”