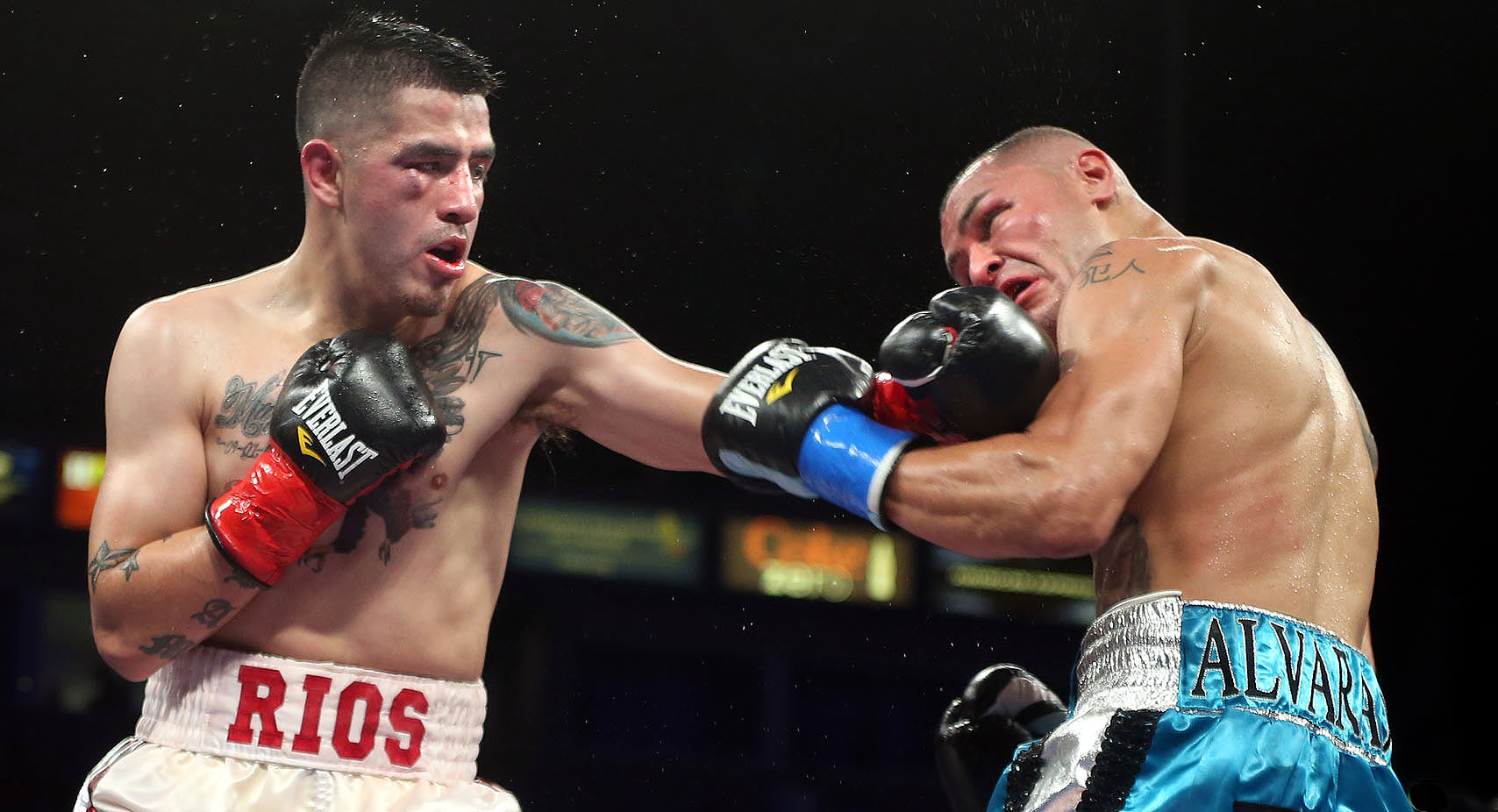 Baseball has its fall classic and in October, boxing was treated to one of its own. As soon as the fight between Brandon Rios and Mike Alvarado was announced, the expectations were high as can be because of the way these 2 guys fight. Brandon Rios is almost never in a bad fight with his come forward style and because of his punch resistance in his chin. Mike Alvarado possessed the same attributes.

Rios had a sluggish start to 2012. He had already outgrown the light weight division and was slated for a mega showdown with Yuriorkis Gamboa, a fight the hardcore fans were just as excited for. However, Gamboa backed out because of promotional issues. Rios fought a different fighter in substitute Richard Abril. Rios, not looking stellar in the bout, had claimed weight issues as most people that he lost the bout.

It was time for him to move up to 140 and when we had Rios on our air he stated, “I want to fight the baddest mother*cker at 140.” To him it was Mike Alvarado and he got that.

Alvarado has been in fun fights himself coming from behind to stop Breidis Prescott in 2011 and winning a decision against a game Mauricio Herrera. However, Alvarado told us that he can bang and box and stated, “Don’t be surprised if I go out and establish a jab out there to change things up.” Rios saw this as a sign of weakness.

The excitement for everyone was there. Even guys like Max Kellerman couldn’t hide their excitement. When I interviewed Kellerman you could see his eyes light up when I mentioned this fight. His words resembled the same sentiment.

So the stage was set, the guys were ready, but would the fight deliver? So many times fights are hyped up and never come close to the expectations that were bestowed on them. This fight wasn’t one of them.

From the opening bell, the punches started to fly and land, almost seemingly at will. Alvarado did what he said he would, tried throwing a jab and landing massive right hands behind it. Rios took them in stride but it almost looked like in the early going that this division might be too big for the style he fights.

Amazingly enough, they combined to throw 190 punches in the first round alone. When Rios went back to his corner he stated to his trainer Robert Garcia, “I love this shit,” I got the chill. Both guys were landing clean, with Rios’ head snapping back in almost every round. Rios used to being the bully, was getting some taste of his own medicine. But that didn’t deter the young lion as he kept pressing on.

In the 5th round which was a candidate for round of the year, the tide seemed to change at the end of the round. Alvarado made Rios’ head snap back and bobble but Rios as he had stated in his corner, loved this type of fight, battled on and did the same to Alvarado. Alvarado seemed to take the punches well too.

Round after round, they threw, they landed, and we loved it. It was a back and forth fight which was pretty close on everyone’s scorecards, including the judges. In round 7, Rios kept pressing landing punches that snapped Alvarado’s head back mightily and hurt Alvarado on the ropes. It was the most vulnerability we’ve seen from either fighter. Referee Pat Russell saw that too  and stopped the fight giving, Rios the stoppage victory.

While Alvarado lost the fight, it felt like there were no losers in this fight. Rios put his name in to get a big fight, Alvarado raised his profile, and we the fans got a classic war out of it. While this might have lacked the drama and knockdowns of Pacquiao-Marquez, it delivered nonstop, even action for a good 20 minutes.

No, this wasn’t Gatti-Ward but it was a fight that lived up to expectations, so much that we might see a sequel in 2013. At the end of the fight Kellerman asked Rios if he would give Rios a rematch, so Rios asked the crowd, “Do you want it?” With the crowd cheering loud, Rios responded, “If they want it, my manager and promoter want it, F*ck it, let’s do it!” This fight took our award for fight of the year and if the rematch is made, hopefully it can be considered for 2013 fight of the year.