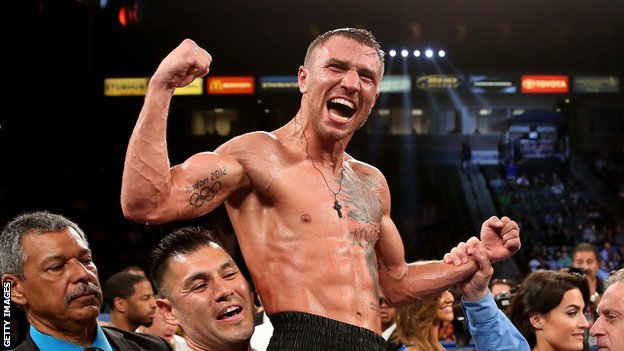 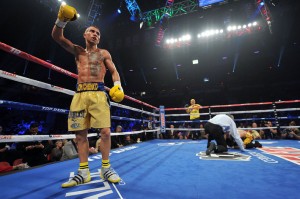 Two-time Ukrainian Olympic gold medalist Vasyl Lomachenko is enjoying the kind of stage any up and coming fighter could only dream of getting. He is fighting on the same card as the biggest fight in boxing history. Lomachenko (3-1 0 KO’s) is set to make a second title defense of his WBO featherweight championship against unfamiliar Gamalier Rodriguez (25-2 17 KO’s) from Puerto Rico on the Mayweather vs. Pacquaio undercard. One can consider this a “gift” from his powerful promoter Bob Arum, who shows great passion for the career of Lomachenko. Arum has even been quoted as saying “He can be one of the greatest fighters of our time.”

Lomachenko certainly entertains these praises, even though, his professional credentials don’t show it. He is a two-time gold medalist and has an amateur record of 396-1 with that loss being avenged twice.

With only four professional fights, all of which have been against top competition in his division Lomachenko can go down as one of the great fighters we have seen. He will likely take advantage of the step down in competition on May 2nd and fully showcase his talents. This fight against Rodriguez is strictly to show the superb boxing skills of Lomachenko, which are a beauty to watch if you’re a fan of the sport. I’m sure Rodriguez will be game and try to impress with such an amazing opportunity, but he doesn’t pose many dangers to Lomachenko.

The big fight fans and promoters are salivating over a fight with “The Axe Man” Nicholas Walters. Walters is currently tied up as he is set to fight in June on HBO, but if he and Lomachenko get past their upcoming test then look out for these two to clash. Walters is on record calling out Lomachenko and this fight has been waiting in the balance since Walters destroyed once featherweight P4P king Nonito Donaire. As time passes the tension grows, let’s see if both fighters come out of their fights with hands raised so we can look on to another super fight down the road.