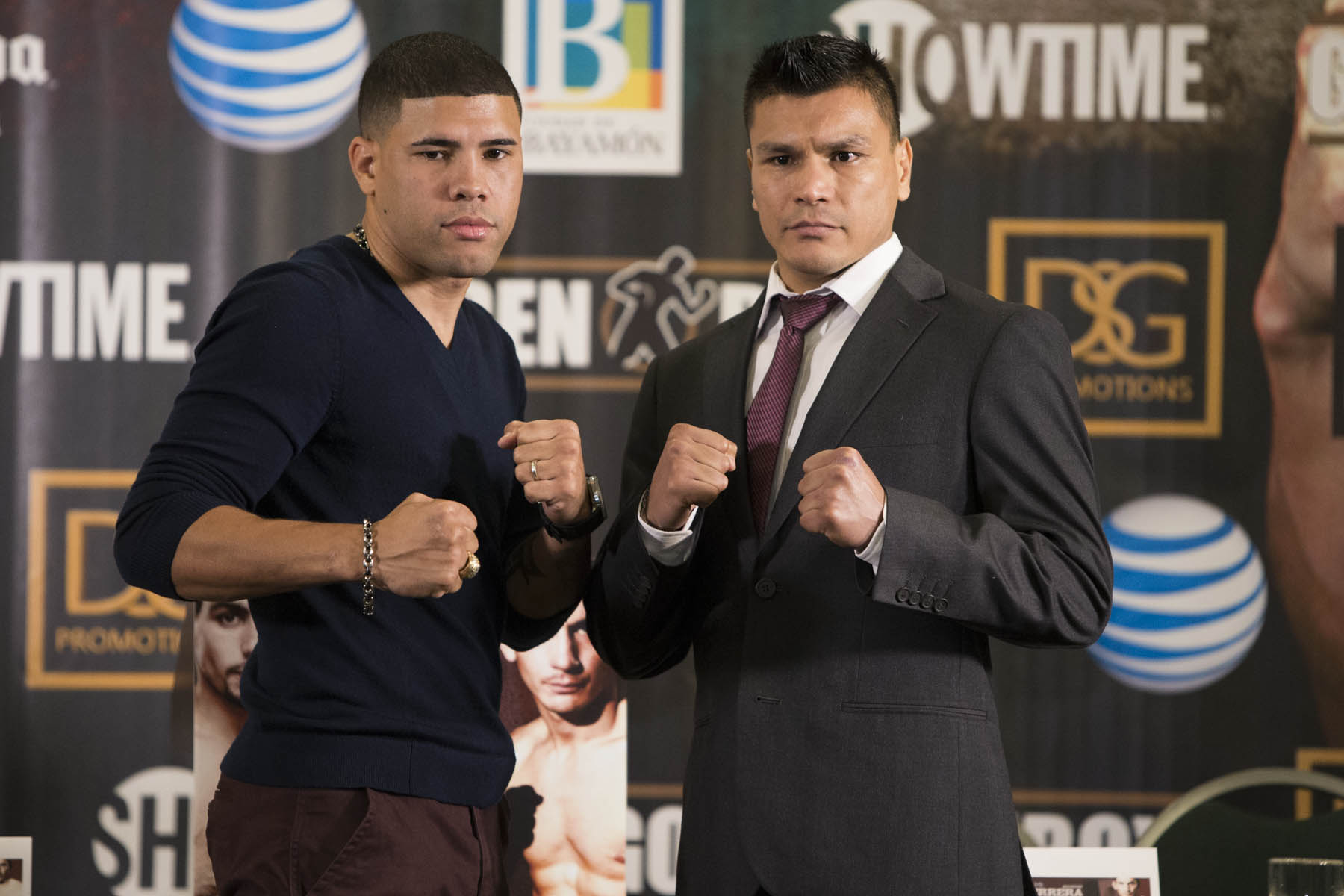 NEW YORK (March 12, 2014) – SHOWTIME BOXING on SHO EXTREME® provides viewers across the country an opportunity to watch live undercard fights they would not otherwise be able to see.  For the boxers, it provides oft-needed, national exposure.

Since the series began in February 2012, it has been a proverbial mixed bag of boxing match ups on SHO EXTREME, serving as a special lead-in to live SHOWTIME CHAMPIONSHIP BOXING® events on the network’s flagship channel, SHOWTIME®.

There have been familiar faces and household names, such as heavyweight Chris Arreola, to virtual unknowns, from Olympians and young prospects in six- and eight-round matches to established, well-known world-ranked contenders in 10-round scraps. Once on SHO EXTREME there was a world title fight — Light Heavyweight Champion Nathan Cleverly versus Shawn Hawk.

This Saturday, March 15 (7 p.m. ET/PT, delayed on the West Coast), the featured matchup is one of the best, most important ever on SHO EXTREME, a career-crossroads rematch fight between proud, battle-tested southpaw warriors and former world champions, two-time Puerto Rican Fighter of the Year, Juan Manuel “JuanMa” Lopez(33-3, 30 KOs), 30, of Caguas, and Mexico’s revenge-minded Daniel “Ponce” de Leon(45-5, 35 KOs), 33, of Los Angeles.

What’s at stake? The winner in the WBO International Junior Lightweight Title fight remains relevant in the division. The loser takes a massive step back. In the opening bout on SHO EXTREME, cancer survivor-turned-world title challenger, the inspirational Danny Jacobs(26-1, 23 KOs), of Brooklyn, N.Y., faces Milton Nunez (26-9-1, 24 KOs), of Barranquilla, Col., in a middleweight tussle.

The 5-foot-7 Lopez was an amateur standout in Puerto Rico; he was a five-time national champion and 2004 Olympian. After going pro in January 2004, JuanMa went on to become a WBO featherweight (two successful defenses) and junior featherweight (five successful defenses) world champion. He was Puerto Rican Fighter of the Year in 2008 and 2009. He embarrassed Ponce on June 7, 2008, winning his first world title by first-round (2:25) knockout.

JuanMa has fought the best in his weight classes. Besides Ponce, he’s been in with world champions Mikey Garcia, Orlando Salido two times, Rafael Marquez, Steven Luevano and Gerry Penalosa. For years he was one of boxing’s legitimate rising stars and a hero in Puerto Rico. But he’s in a different position now: he’s trying to regain his former status after three knockout losses in his last six outings.

Two of the KO defeats came at the hands of Salido, the other in his last start on a fourth-round TKO to defending WBO 126-pound titleholder Garcia on June 15, 2013. This will be the first skirmish at 130 pounds for JuanMa in his nine-year-career. Only three of his fights have gone the distance.

“We are working hard. I feel great. I have a new trainer (Freddie Trinidad, second cousin of Felix). We are training intelligently. Ponce is a dangerous, strong fighter. I think he’s a better fighter now, so we are training for the best Ponce de Leon. I know this fight is not going to be the same as the first. We can’t look back to that fight. I am concentrating on winning this fight round by round.”

The 5-foot-5 Ponce represented Mexico in the 2000 Olympic Games before turning pro in March 2001. He’s a former WBC featherweight and WBO Junior Featherweight (six successful defenses) world champion. The current WBC No. 5-ranked contender at 130 pounds, he is 8-2 in world title fights.

Ponce is 4-3 in his last seven fights — four against top-level opponents, including an impressive victory over current WBC Featherweight Champion Jhonny Gonzalez (TW 8) in September 2012. The losses came to ex-world champions Abner Mares, Yuriorkis Gamboa and to the naturally bigger Adrien Broner on a close 10-round decision. Other former world champs he’s fought include Penalosa and Celestino Caballero.

In his last start and first at 130 pounds, Ponce won a lopsided 10-round decision overJoksan Hernandez on Nov. 16, 2013. Like JuanMa, Ponce expects the rematch to hardly resemble the first one.

“Fights are always different,” he said. “It (their initial encounter) was my eighth defense. I was too overconfident heading into the fight and he caught me cold in the first round. But that fight is in the past. I had a different team, manager and trainer, then later on I made some changes.

“I was different then. I never thought in the ring. Before, I used to always jump on top of my opponents, but now I have transformed into a different fighter. For this fight, I feel good and am 100 percent ready.

“I see Lopez the same way everyone else sees him. He hasn’t been the same. He has gone down and is a different fighter. I asked for the rematch a long time ago, and this is the perfect time to be fighting him. Now I look forward to going into the fight in top shape, very well-prepared. I want to win this fight.

“I have everything stacked against me fighting him in Puerto Rico. I don’t want to leave it in the hands of the judges. The knockout is important — it’s a must.”

Jacobs was an outstanding amateur who defeated, among others, fellow-standouts such as Mike Jones, Shawn Porter, Shawn Estrada and Austin Trout before making his pro debut in December 2007.

The 6-foot-1 Jacobs is currently ranked fifth in the WBC and IBF, sixth in the WBO and seventh in the WBA at 160 pounds. A winner of six in a row by knockout, the 27-year-old is coming off a career-best third-round TKO over Yovanny Lorenzo on Aug. 19, 2013. It was Jacobs’ fourth fight since returning to the ring after courageously winning a 19-month battle against cancer and partial paralysis.

“I’ve had a marvelous camp,” said the talented boxer-puncher, whose only loss came on a fifth-round TKO to then-WBO middleweight titleholder Dmitry Pirog on July 31, 2010. “I’ve been getting ready for this fight for about three months. I trained in Australia for about a month in Sydney. I got a lot done and learned a lot. The weather was great, it was a good change of environment. I’m feeling great.

“I’m truly, truly excited about this fight. Being that it’s in Puerto Rico, that’s going to be exciting for me. My girlfriend is Puerto Rican, and this will be her first time having a chance to go there.”

Nunez, 26, has an awkward, aggressive style and possesses good punching power. No stranger to fighting up-and-coming contenders, the six-footer will be looking to regain his winning ways after losing his last fight to Sergio Mora on Nov. 16, 2013.

SHO EXTREME is also the home of boxing replays and “Classic” SHOWTIME fights, which air every Monday-Friday at 10 p.m. ET/PT. The live “SHOWTIME BOXING On SHO EXTREME” fights are replayed on Wednesdays at 10 p.m. following the live presentation the previous Saturday.