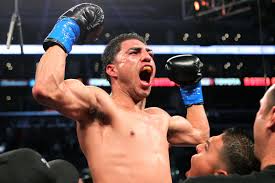 Since suffering grueling back to back losses at the hands of the hard-hitting Canelo Alvarez and Marcos Maidana, fan-favorite Josesito “The Riverside Rocky” Lopez (32-6, 19 KOs) is picking up some steam in his campaign to return to boxing’s main stage.

His opponent tonight was Tijuana native Rafael Cobos (13-5, 2 KOs), a fighter known for his come-forward style despite his relatively low knock out rate.  A win tonight for Lopez is essential as rumors continue to fly that a fight against former light welterweight champion Amir Khan in December is next on the docket

Both fighters got off to a quick start with Lopez confidently jabbing and seeming lighter on his feet than in previous fights.  After bouncing around from super lightweight to jr. middleweight, Lopez, at first glance, seemed to finally be settling into his new weight.  A pair of hard right hooks and left body shots were traded by both fighters as the mostly-uneventful first round came to a close.

While Lopez is also not particularly known for his punching power, the difference in that arena, as well as hand-speed, was apparent, with the the California based fighter getting the best of most of their exchanges throughout the fight.  This may have been more due to clever matchmaking than any improvements in Lopez’s game.

Though he used it sparingly, as if waiting for the perfect opportunity to land a fight-ending blow, Lopez’s left hook landed consistently over the Cobos’ low guard throughout the first half of the fight.  The knockout never came and the affair came to a close with very little fanfare.

Lopez pitched a shutout in the eyes of the judges with all three scoring it 80-72 for the former WBC Silver Welterweight beltholder.  If he was trying to build a case to show that he is deserving of Amir Khan in December, the jury will be out on that one for a while.  That being said, who ever said that being exciting, winning-convincingly, and dominating your opponent is a requirement to getting a big fight when you’re managed by Al Haymon.