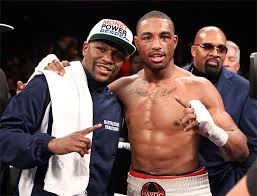 Undefeated super middleweight contender J’Leon Love is just a few months removed from the toughest fight of his career, but the Floyd Mayweather protégé doesn’t expect things to get any easier this Saturday when he steps into the ring with hard-hitting veteran Rogelio Medina.

Love (18-0, 10 KOs) and Medina (32-6, 26 KOs) will square off in the 10-round main event of a special Saturday presentation of ShoBox: The New Generation, LIVE on SHOWTIME® immediately following the premiere of ALL ACCESS: Mayweather vs. Maidana 2 Episode 1 at 9:30 p.m. ET/PT.

Tickets for the Mayweather Promotions “Desert Showdown” from The Pearl at the Palms Casino Resort in Las Vegas are priced at $25, $50, $75 and $100, plus applicable taxes, fees and service are on sale and available for purchase by clicking HERE.

Love picked himself off the canvas this past May 3 to register a hard-fought victory over former world title challenger Marco Antonio Periban. But while Love is looking to make another step toward becoming the 56th ShoBox alum to graduate to a world title, Medina is aiming for redemption in his return to the series after getting knocked out by Love’s stablemate and sparring partner, Badou Jack, last December.

In the co-feature, once-beaten super middleweight contender Badou “The Ripper” Jack (16-1-1, 11 KOs) will look to bounce back from the first loss of his career when he takes on Jason Escalera (15-2-1, 12 KOs), who has never been knocked down and has not lost a fight contested at 168 pounds. Jack vs. Escalera will be a 10-round super middleweight bout.

In the opening bout of the telecast, undefeated yet untested super middleweight prospect Ronald “Thrill” Gavril (9-0, 7 KOs) will square off Thomas Falowo (12-2, 8 KOs), who spent the past month as a sparring partner for Sakio Bika, in an eight-round super middleweight contest.

Here’s what the fighters had to say as they prepare for Saturday’s showdowns:

J’LEON LOVE:
“My last fight was definitely a learning experience. Periban was a title contender and a very experienced fighter. I faced some adversity and I was able to bounce back and come through with a win.

“Every fight is a learning experience, but this one was under the big lights. It shows I have the heart and determination to win. I know where I want to go with this and I know a world championship is on the horizon. I think I have maybe two more fights before I fight for a belt.

“I’m still growing as a fighter, but I’ve graduated from prospect to contender and I’m just a few wins away from graduating to world champion. Saturday night is just another step. I think I’m almost there.

“Being in shape is the No. 1 key, following the game plan is next. Just staying focused is what gets you the victory. I have a great team around me that won’t let me slack off or fall victim to cutting it short in the gym.

“Badou isn’t just a training partner; he’s like a brother to me. He told me I can’t take Medina lightly, he told me to be careful because this guy can put you down. He’s tough, he’s going to bring it and I have to stay sharp.

“We always want to work on our defense. The guy has a lot of power but your hands can’t hit what your eyes can’t see. I have great movement and defense and we need to apply that to the game plan. I can’t let him get off. I need to take control and do what I have to do to get the victory.

“I step in the ring to make a statement every time I fight. This is just continuing the pace of what we’ve been doing. Just get that W and move to the next opponent.

“I grew up watching the world champions today fight on SHOWTIME and here I am headlining a card in Vegas. It’s an honor and a blessing. This is to show we are the next generation of fighters that the world is going to see. We’re here to make a statement.”

ROGELIO MEDINA:
“I’ve been traveling to my opponents’ turf for my last few fights, but I don’t really care about that too much. It’s just the two fighters in the ring. There aren’t that many fighters in my weight division in Mexico so that’s why I have to fight on the road for the good opportunities.

“I actually didn’t know that Jack and Love were sparring partners until recently, but every fight is different so I’m looking at this as another big opportunity for me. If my opponent feels that just because I lost to Jack then he will have an easy night, then he’s in for a surprise.

“My trainer and I have been watching a few of Love’s fights and have been working on some things in the gym that we can take advantage of. I think Love was actually given too much time to recover from the knockdown against Periban. I know that he can be hurt and when I hurt him I plan to be more aggressive than Periban was. I need to take advantage of that.

“I definitely need a win to get back on track. I don’t think about getting a knockout or a decision, I just think I need a win and will be ready for it however it comes.

“In my last fight I went up against the local favorite, Jonathan Gonzalez. My team, the TV commentators, the fans in the stadium, they all thought I should have won the fight but they gave it to him by split decision. At first I was upset, but I know I gave it my all and put on a good fight. I think I won and now I’m just focused on my next fight.”

BADOU JACK
“My last fight was the most disappointing minute of my life. It wasn’t really a lucky punch, so I’m not making excuses, but he’s not on my level and I wasn’t supposed to lose. I threw a lazy jab and got caught, so it was my fault. He was lucky he landed it because I was just stupid.

“I’ve been in the gym for five months, focusing on not throwing lazy jabs and working on my range. I’ve been sparring with both J’Leon and Ronald, but mostly Ronald. They all look good, everyone is in top shape and we’re ready.

“This guy (Escalera) is tough and coming to fight so I’m going to be 100 percent ready for him.

“I thought I would get an immediate rematch against (Derek) Edwards, but I guess he pulled out.

“I just need to keep winning. Things happen and life goes on. Right now, I need to beat this guy and we’ll be right back in contention for an eliminator or a world title shot after maybe one or two more fights.

“I want a rematch, I want to avenge my loss. I’ll do anything to get that fight made just for my pride. Other than my pride, that guy was nothing special. I want to be a world champion one day so I know I have to fight the best out there.

“I told J, don’t sleep on Medina. He can punch and he’s very tough. He’s not the most skillful fighter, but he has 26 knockouts. He can punch hard and he definitely throws a lot of them. I told him to just be smart in there.”

“I’m undefeated at 168 pounds. This is the weight for me, for my future. I’m like a whole different person fighting at super middleweight. I feel good and strong there.

“Training camp is going well. I’m getting great work with amateurs and pros, quick people, people who move around and don’t stay right in front of me. I like to spar with people who stay toe-to-toe with me. We know Badou likes to throw straight punches, so I’m working on perfecting my bob and weave

“It’s a great style matchup. I fight better when my opponents are brawlers. I like guys that come forward, confront me and fight. I’m not the type to run after fighters. We’re here to fight and that’s what we’ll do on Saturday.

“If he makes a mistake again he will get dropped with the same punch. I feel sharp, I feel good, I’m ready to rumble.”

“We’ve been working on a few things, trying to work on my jab.

“This should be a good matchup for me. They tell me this guy likes to stand there and trade and that’s what we’ll give him.”

THOMAS FALOWO:
“Sparring with Sakio Bika was a great experience. He can definitely crack. That was definitely some grade-A work right there.

“This is a good matchup for me. I like the fact that he seems to come forward. I definitely think it’s going to make for a fan-friendly fight.

“I’m just very grateful for this opportunity. The timing couldn’t be better – I’ve been feeling like I’m at my peak right now. Between the training camp and how much I’ve improved over the past couple of months and the past couple of fights, I’m ready.

“I understand that I’m going into this fight as the underdog, but by no means am I an opponent. I’m going in there and I’m coming out with that win. I’m ready to go.”