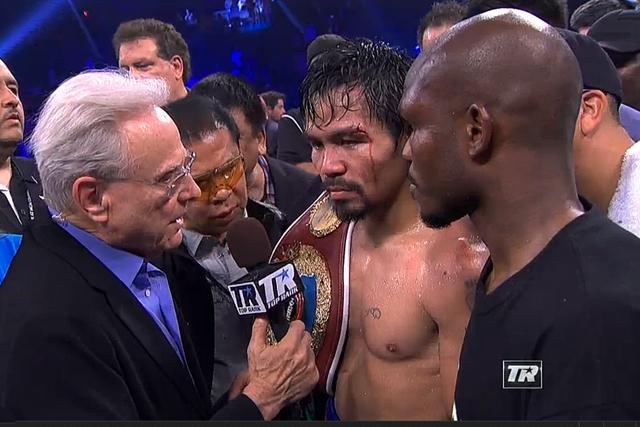 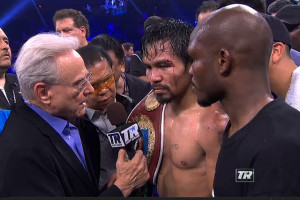 On November 22nd, making his first defense of his WBO Welterweight title Manny Pacquiao takes on Long Island’s Chris Algieri. Since 2003 Larry Merchant has not only called the color commentary on the broadcast for the future Hall of Famer but he has been witness to all the trials and tribulations that have spanned over a decade since Pacquiao burst onto the HBO airwaves.

Since entering the ring against Emmanuel Lucero, Pacquiao has shown that he is more often than not levels above his competition. Merchant feels that although Pacquiao is aging, he is finding new facets to his game and using them to complement his plethora of already existing gifts.

“Manny has really come full circle in his evolution as a fighter from a one dimensional whirlwind to a multi-dimensional whirlwind. Now he’s gone into a boxing mode which is not unusual for veteran fighters as we can see with Bernard Hopkins,” stated Merchant.

Back in April of this year, Pacquiao avenged a controversial decision over Tim Bradley that he suffered two years prior to regaining his throne. The major advantage that Bradley tends to have over this opponents is his natural ability to display his pugilistic purity. Although Pacquiao is the aging fighter, Bradley threw caution to the wind and Pacquiao took advantage of his aggression to box his way to a unanimous decision. Now just months away from his title defense, Pacquiao will be matched up with another boxer but this time he will be much taller than Bradley who stands about 5’5 “He’s fighting a younger bigger boxer (Algieri). In his last fight Pacquiao out-boxed the boxer Tim Bradley. Bradley couldn’t cope with his quickness and smarts. The questions is whether Algieri can, and Algieri has a lot going for him in this match-up.”

Algieri upset the apple cart in his last time out against Pacquiao’s stablemate Ruslan Provodnikov. In that fight, Algieri overcame a big obstacle that came in the form of two first round knockdowns and a massive hematoma over his right eye. The conclusion to the fight was all but clear. Algieri  walked away with the split decision victory and boxing fans were given ammunition to reload their argument gun aimed once again at the everlasting question, “How do you score fights?”

While Merchant acknowledges that there can be an argument made to both sides, he thinks that the power punching and the relentless pressure of Provodnikov was enough to win the fight, he stated, “I respect both sides of it. I come out on the side of the guy that puts more hurt on the other guy generally and that was Ruslan but I can understand why some people who have not evolved as I have in that direction. I like what Algieri did but I just don’t think he won the fight. I think he did a good job and I perceive him as a potential threat to Pacquiao.” Merchant continued, “The amazing thing about how he (Pacquiao) has evolved, is how high of a standard as a boxer he set because he still has amazing quickness and sight. We may find that Algieri is stepping to a higher level which might not be good for him.”