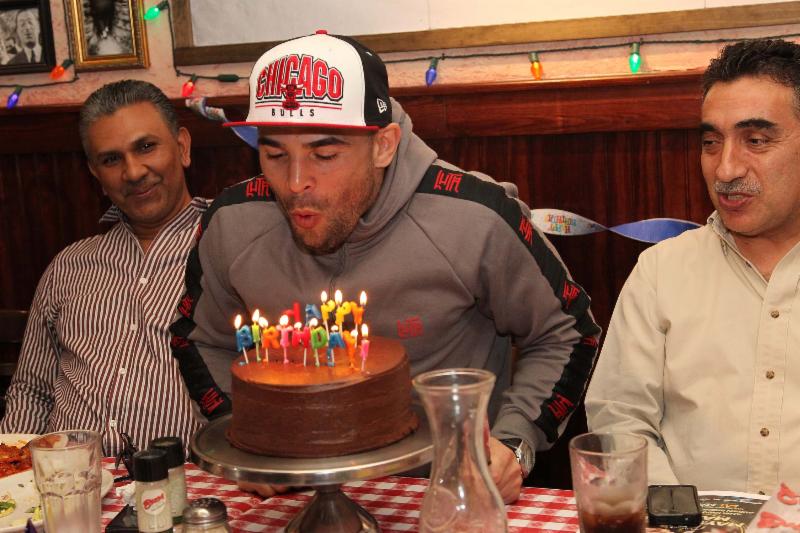 NEW YORK CITY (April 22, 2014) – Former WBA Welterweight World Champion and current WBA International Welterweight Champion Luis Collazo spent the afternoon of his birthday speaking with reporters about what he calls the “highest plateau that one can fight on.” Collazo, who turned 33-years-old today, will face former unified world champion Amir “King” Khan in the co-main event of “THE MOMENT: Mayweather vs. Maidana” on Saturday, May 3 at the MGM Grand Garden Arena in Las Vegas live on SHOWTIME PPV®.

Collazo opened up about his spirituality, work ethic and excitement for this chance of a lifetime taking place in less than two weeks. Below is a selection of Collazo’s thoughts ahead of his fight against Khan.

“This fight [against Khan] is my whole career right in front of me. I believe if I beat Amir Khan I have a bigger future in boxing and if I don’t, I have to start from the bottom again.

“I am not looking beyond Amir Khan. He is my main focus. From here whatever happens happens, but Amir Khan is all I’m thinking about right now.

“[What has changed between when he first held a world title and now] Back then, I was giving glory to myself, but now I give all glory to God. Wherever I go today is because of Him. Before I was on my time, now I’m on God’s time and I believe that God has given me the motivation to perform the way I’m performing. I’m going to keep performing at the elite level.

“A win over Khan does put me in the Mayweather sweepstakes, but my sights are set on Khan.

“[On Khan wanting to fight Mayweather] When Khan looks across the ring, he isn’t going to see Floyd Mayweather. He is going to see Luis Collazo. I am the best.

“On May 3rd, THE MOMENT is going to be my moment.

“Being born and raised in Brooklyn means everything to me. To be able to go out there and perform at an elite level, coming from Brooklyn is everything. To see the transformation of where I’m from to where I am is tremendous.

“I believe this is the most exposure that I have seen in my career.

“When Floyd fights, everybody watches. Now to be able to fight in the fight right before he steps into the ring is tremendous.

“This is the highest plateau that one can fight on. You have to go out there and perform.

“Now that I am living a spiritual life, I am a different person. Yes I’m older, but spiritually I feel like I’m 22.

“We are supposed to go through trials and tribulations. That is what shapes our personality.

“Yeah I have five losses, but a lot of people remember you for your last outing, and my last outing was tremendous. If my last fight was a defeat, people would keep bringing it up.

“[On the Ortiz fight] On that night Ortiz looked like the old man. If you are taking care of yourself and have faith you can overcome any obstacle.

“The water in Brooklyn is just breeding great fighters. We have great guys coming out of Starrett City Boxing Gym. These kinds of gyms are the best kinds of gyms. That is what creates fighters in the ring that are going to give 110 percent every time they go out.

“I hope Khan is ready on May 3 to fight me, not someone else. It’s going to be an explosive night not just for me, but for the boxing fans in general.

“Khan is going to fight the best Collazo on May 3. Whatever he said he said. Talk is cheap.

“At this point in the game 75 percent is mental and the other 25 is physical. Mentally it is easy to breakdown. You have to go into the ring and be smart.

“Fighting for my first title was my hardest fight. I came out of it with a fractured rib. The last three rounds I was exhausted, but I gave it my all and I made sure that I left everything I ever fought for in that ring.

“My prediction for this fight is that I am going to be victorious.”

“I think Luis has been one of the luckiest fighters through his ups and downs. He has had the option to fight fighters from all of the different promotional companies. He never sold out. I think to me Luis is one of the top three fighters in the world and he’s been like that for a long time. He has just been overlooked.

“Luis is guiding us, God is guiding him and we are doing the work together. He is enjoying this. I am very proud of him.”