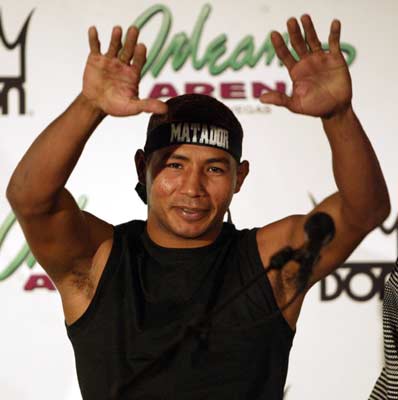 It has been over three years since Ricardo Mayorga fought in a boxing ring and after failed attempts at MMA and a boxing comeback that has yet to happen due to interference by Don King he has his sights set on WBC interim middleweight champion Marco Antonio Rubio whom recently expressed interest in a fight with Mayorga and it may take place in July.

Mayorga will soon be heading to Las Vegas to begin training with Joel Juda (father of Zab) and is confident that he can make 160 pounds and knock Rubio out within five rounds. Mayorga also believes that if that fight is unable to be made it is becaue Rubio is afraid of him due to their previous encounters in sparring.

“In Mexico they all know that if the fight is not done it is because he is afraid,” said the 41 year old fighter. “I will accept whatever purse they offer me. What I want is to win that title. If he wants to fight in his backyard then we can and I will win.I have never failed to make weight. I weigh 174 pounds, honestly! To lose 14pounds will not be that difficult. I’d give him four or five rounds before I knock him out. ‘El Veneo’ is an easy fighter and I’ve sparred with him while preparing for my first fight with Vernon Forrest.”

Mayorga has stated that he would have no issues fighting Rubio in Los Angeles and that he also has a lawsuit against Don King for 30 million dollars from issues dating back to when Mayorga fought Oscar De La Hoya and accused lawyer Antonio Gonzalez of not allowing him to get the money he should have gotten for his biggest fights.

”Tony and Don King have confused me throughout my career. In Los Angeles I asked Oscar De La Hoya how much did he pay King for the fight with me and he told me it was the most bought event of the year. Don King paid me 1.1 million U.S. dollars for that fight. Tony told me that I had no earning from the PPV but De La Hoya said that he gave Don King 21 million dollars and I got nothing from that money. I should have at least received 10.5million but King never gave it to me. Don King has fucked me over so much so I sued him for 30 million dollars. I did it (sued King) because he stole a lot of my money. He stole from me from the Trinidad fight,  with the De La Hoya fight as well as the Mosley fight and the last fight which was with Miguel Cotto. In total he stole 27 million U.S. dollars from me. ”