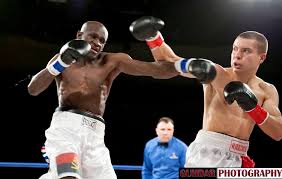 Wierzbicki made his début on a small pro-am card in Red Deer, Alberta in which the crowd was filled with many Polish fans. The fans were chanting throughout the card before until the Wierzbicki fight took place so one had to wonder who was this kid that brought so many people to see him fight? Once the opening bell sounded one knew why so many people enjoyed watching Wierzbicki fight.

After that first fight I thought to myself,  Man I gotta see this guy fight again, but I and many others had to wait due to fights falling through but during that time Wierzbicki made some changes which has benefited him today. A change in gyms and a different trainer from when he made his début and things seem to have come together.

2014 has been a busy and a productive year for Wierzbicki. The slick southpaw has gone 5 for 5 this year and has scored two kncokouts but that’s not the best news he has had this year. Not to long ago he signed with Cameron Dunkin and now he has officially signed on with U.S . promoters Hitz Boxing out of Chicago which will provide excellent opportunities and exposure for Wierzbicki he is pumped to fight in the U.S. and expects to do so next year.